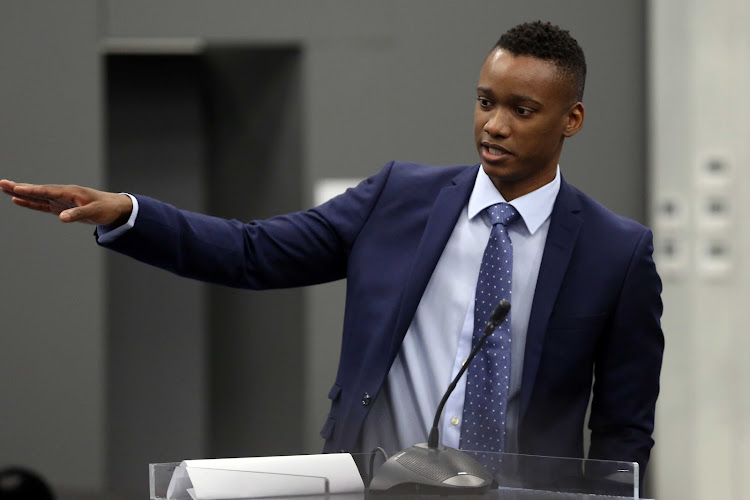 Duduzane Zuma says he has “no idea” why former deputy finance minister Mcebisi Jonas would lie about the Gupta family allegedly trying to bribe and threaten him into taking over the finance minister post.

“I think you also need to know why my version was never asked for,” the son of former president Jacob Zuma testified at the Zondo commission on Monday.

He asserted that then public protector Thuli Madonsela had not give him a “fair shot” at giving his side of the story.

Zuma junior said he had been contacted by Madonsela’s office at the time she was conducting her “State of Capture” investigation - which led to the establishment of the Zondo commission - but was not able to give her an interview because he was out of the country. By the time he returned, her report had already been released.

Duduzane 'completely refutes' being at meeting where massive bribe was offered

Duduzane Zuma has denied allegations that he was present at a meeting when former Free State economic development MEC Mxolisi Dukwana was offered a ...
News
2 years ago

Jonas told the inquiry in August last year that he was told by Ajay Gupta in the meeting where he offered him the job that they saw the National Treasury as a “stumbling block” and would require him to remove several officials.

Jonas said Gupta had told him just before he left the family’s Saxonwold residence that he would be killed if he spoke out about the meeting.

Earlier in the meeting, in which controversial arms deal adviser Fana Hlongwane and Zuma were silent, according to Jonas, Gupta had told him “you must understand we are in control of everything”.

Zuma insisted on Monday that he had arranged a meeting with Jonas at the Gupta’s Saxonwold home to discuss a rumour about him and Hlongwane - not to facilitate an alleged Gupta family bribe offer to Jonas.

However, in often painstaking questioning by inquiry evidence leader advocate Phillip Mokoena and Zondo, Zuma was repeatedly challenged about why he would have been called on to arrange this meeting between Hlongwane and Jonas, who he had confirmed were old friends.

Zuma said he had not met Jonas prior to October 2015, which is when Jonas alleges a Gupta brother offered him then finance minister Nhlanhla Nene’s job in exchange for doing the family’s bidding.

When former deputy finance minister Mcebisi Jonas climbed into the Mercedes Benz two-door car, he knew they were going to the Gupta family home in ...
News
2 years ago

Mokoena asked Zuma whether he had told Jonas that he wanted to meet with him to discuss a rumour that Hlongwane was trying to blackmail the then deputy minister. Zuma said he had told him but had not included this in a sworn affidavit filed at the inquiry.

Zuma claimed Jonas’s reaction to this was “very relaxed … there was not any apprehension”.

Mokoena also pointed out that Jonas had revealed that Hlongwane had contacted him in August 2015 and told him that Duduzane Zuma wanted to invite him to an awards evening.

Evidence led at the inquiry further indicated that there had been a separate meeting between Jonas and Hlongwane in October 2015, where he was told that Zuma wanted to meet him.

That evidence was raised by Mokoena after both he and Zondo repeatedly asked Zuma about why Jonas and Hlongwane would need him to arrange a meeting when they were able to contact each other and he was only close to Hlongwane and not Jonas.

He responded by claiming that he had decided to arrange the meeting after hearing multiple “murmurs” and rumours that Jonas was allegedly making damaging claims about Hlongwane.

“It is strange that someone who is a stranger to one party is called on to resolve this,” said Zondo.

Zuma responded that he had done so “on numerous other occasions” and was “the one who raised the issue about Mr Jonas” with Hlongwane.