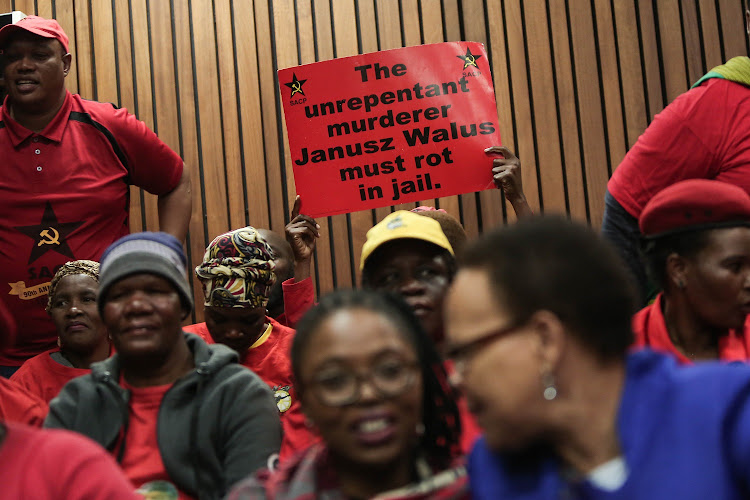 Members of the SACP at the previous parole application of Janusz Walus, on August 7 2018, at the North Gauteng high court in Pretoria.
Image: Alaister Russell/The Sunday Times

The decision by former justice minister Michael Masutha not to grant Chris Hani's murderer, Janusz Walus, parole in January this year was rational.

This is according to the minister's advocate, speaking in the high court in Pretoria on Monday.

The minister is opposing Walus's application to set aside Masutha's decision.

Masutha's counsel, Marumo Moerane SC, said the minister had taken into account reports showing commendable behaviour by Walus while incarcerated, the various programmes aimed at his rehabilitation, and statements which were favourable to him contained in psychological reports and those compiled by social workers and correctional services officials.

Lawyers for Janusz Walus, the murderer of SA Communist Party leader Chris Hani, asked the high court in Pretoria on Monday to set aside then justice ...
News
2 years ago

"Notwithstanding these positive factors, the interest of the community not to be placed in danger of a person likely to reoffend was taken into account," Moerane said.

"Mr Mbele's report was balanced. He makes certain statements and expresses opinions that are in favour of [Walus]. One cannot see bias.

"This opinion that [Walus] showed no remorse appears under Mr Mbele's clinical observations. The minister could not ignore this opinion," Moerane said.

Moerane said Masutha's concern about Walus's lack of remorse was justifiable. "If one does not have remorse, the risk of reoffending is enhanced."

Moerane said Masutha's decision not to place Walus on parole was rationally connected to the information before him.

He said the decision achieved a reasonable equilibrium between positive factors favouring Walus's release on parole and the factors negating his placement on parole.