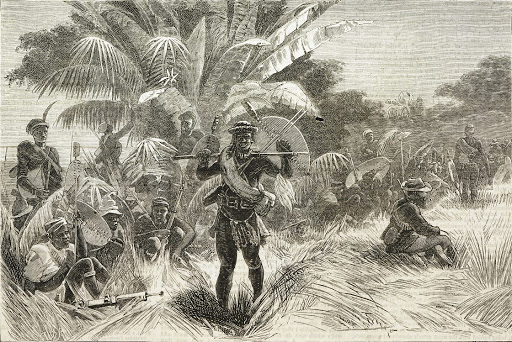 An illustration of the Anglo-Boer War, which has come to be known as the South African War, from the magazine The Graphic, Volume XX, No 518, November 1 1879.
Image: BIBLIOTECA AMBROSIANA

For as long as the lion cannot write or read, the story of the hunt shall always be told from the point of view of the hunter.

When Nigerian thinker and novelist first used these words, he was responding to the paucity of African stories being told by Africans.

Which brings us to the Anglo-Boer War of 1899. For a long time this was spoken of as a white man's war. That is until a few years ago when evidence emerged showing deep black involvement in this conflict. Hence the rechristening of the war as the South African War.

While I am happy that Achebe's proverbial lion is finally picking up the pen to tell its story, there's a story about this war that hasn't been done justice to.

It goes like this: Before the war started in October 1899, thousands of black people, mainly mineworkers, were trapped in Johannesburg. The trains that would have taken them home had been taken by the army.

It did not help that with the closure of the mines, there were chaos in the city. Food riots exploded. Boer commandos had started attacking black people at random.

To deal with the crisis, some prominent members of the Zulu community in the city approached John Marwick, a white official working for the native affairs department, and asked him to arrange safe passage for them.

Born and raised in Richmond, Natal, Marwick was proficient in isiZulu and had recruited many Zulus to work on the mines. Which is why they trusted him. He was generally called uMuhle.

And, yes, home affairs offices countrywide are to this day colloquially referred to as KwaMuhle, in tribute to him. At any rate, it then came to pass that on October 7, Marwick with a huge body of Zulu men, and some women and children, started walking from the Witwatersrand showgrounds.

Imagine a group of between 7,000 and 8,000 people, burdened with their precious belongings, striding across open land in which wild animals still reigned supreme. Think of the summer thunderstorms.

New IFP leader knows he has a mountain to climb

Velenkosini Hlabisa taught history in high school before politics took over his life.
News
2 years ago

It took them 10 days to reach Ladysmith where the march came to an end, with one section of the marchers veering off to Zululand, while others went to Natal.

Marwick and some of those who could afford then boarded a train at Hattingspruit station, all the way to Pietermaritzburg.

Thankfully, not a single fatality was reported during the march. Yes, some people did collapse of exhaustion.

This is the story, therefore, that I have turned into a novel mainly because I am such a sucker for history.

The novel, released two weeks ago, is called The Longest March. It is my 11th published book. But in addition to the book, I have also been training hard as I want to do what those Zulus did 120 years ago.

On Monday, I will walk from Joburg to Ladysmith, a distance of over 400km.

It is important that we take charge of our stories, rather than leave them in the hands of our erstwhile oppressors who are in the habit of distorting facts so that the narrative casts them in a positive light.

Racist former Sodwana Bay guesthouse owner Andre Slade has just 16 days to vacate the land he has been occupying for the past 12 years in ...
News
2 years ago

Grounded in my language but gatvol at lack of service

I apparently speak too fast and my speech is apparently dipped heavily in the Seshego dialect.
Opinion
2 years ago

Buthelezi has accused the ANC government of attempting to grab swathes of traditional Zulu land.
News
3 years ago
Next Article