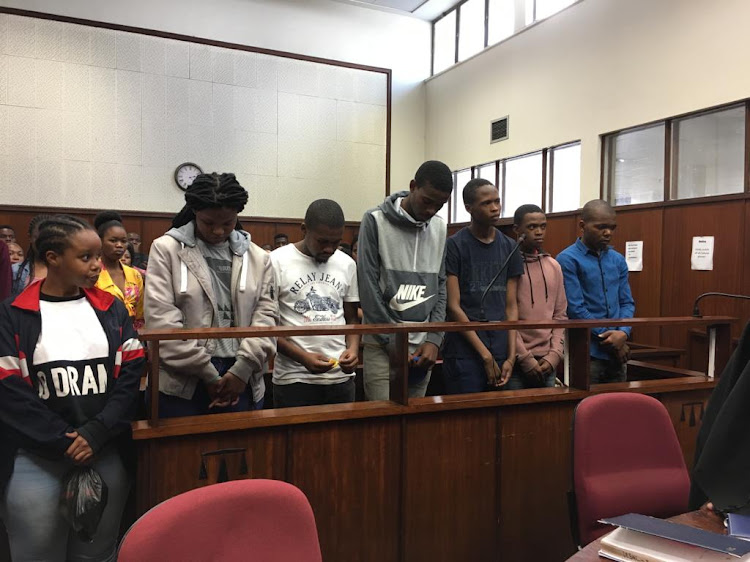 Durban University of Technology SRC president, Thamsanqa Memela, was one of the nine DUT students who shuffled into the dock at the Durban magistrate's court facing an attempted murder charge.

The group appeared in front of a packed gallery on Friday where they were released on R2,000 bail each. They were arrested on Wednesday after they allegedly tried to set a security guard alight.

“This type of anarchy in South Africa is totally unacceptable. There was no reason for all of you to allegedly behave in this unruly manner,” said magistrate Vanitha Armu.

Nine Durban University of Technology students have been charged with attempted murder after attempting to set a security guard on fire.
News
2 years ago

Prosecutor Calvin Govender told the court how the students allegedly started throwing stones and bottles filled with petrol at the guard after he had tried to get them to leave the campus while protesting. They allegedly tried to set the petrol alight. Govender said the guard sustained injuries to his head.

The group's lawyer, Ayanda Khanyile, said his clients denied the charge and intended to dispute that they were present during the incident.

The incident occurred while students were said to have been protesting after first-year industrial engineering student Sandile Ndlovu was stabbed in a lecture room two weeks ago. Students demanded to see security footage from the day of the incident, which the university said it could not provide.

Ndlovu is currently in intensive care.

The university did not respond to a media query sent by SowetanLIVE's sister publication TimesLIVE.

The matter will be back in court on December 4.

A Durban University of Technology (DUT) student was found dead at one of the institution's residences on Wednesday.
News
2 years ago

Students at the Durban University of Technology shut down the institution on Friday and marched to a Durban hospital following the stabbing of a ...
News
2 years ago
Next Article