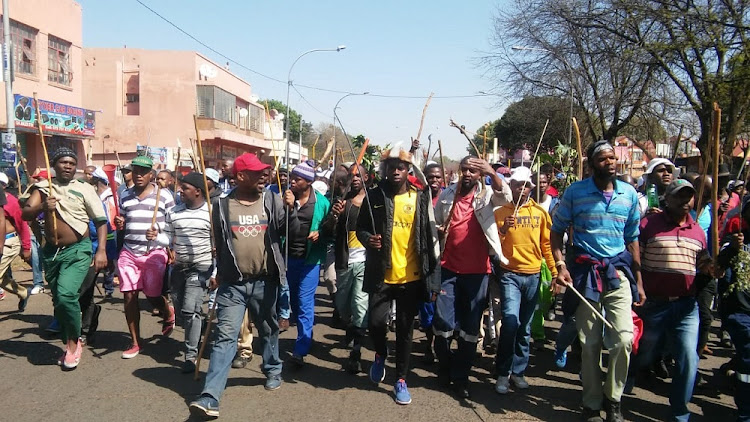 Residents of hostels in eastern Johannesburg earlier on Sunday marched along Jules Street in the area, demanding that  "foreigners must go back to where they came from".

The marchers, who carried weapons such as knobkerries, were heading to Jules Park where former IFP leader Mangosuthu Buthelezi is expected to address them. Last week shops owned by foreign nationals were looted and some set alight in the area.

Violence quickly spread to other areas in Gauteng province, causing havoc for police and government.

The group of hostel-dwellers has maintained it wanted foreign nationals to leave, without indicating clear reasons for their call. The attacks on foreigners, more so the traders, in the past week have been condemned by government and President Cyril Ramaphosa. By Friday, at least seven people had died and over 400 people arrested over the violent clashes.

However, the leadership of hostel dwellers in Johannesburg has asked the government to engage the citizens about finding solutions to the clashes with foreign nationals. Siphiwe Mhlongo, chairman of hostel headmen (izinduna) in Gauteng, who spoke to Sowetan in Malvern, eastern Johannesburg.

"We are not happy with how government has tried to resolve the problems that the country is facing. The government must come speak to the people and explain what it is going to do with the foreign nationals who are here illegally,"Mhlongo said.

Mhlongo was speaking in Belgravia, eastern Johannesburg, ahead of Buthelezi scheduled address on Sunday.

Buthelezi is expected to call for calm among the Zulu people, who are in the majority among the residents in hostels which were formerly men's only residential quarters.

Protesters from various hostels in eastern Johannesburg have begun marching along Jules Street. Carrying weapons, including knobkerries, the men sang, "foreigners must go back to where they came from". pic.twitter.com/SKbWqGePdz