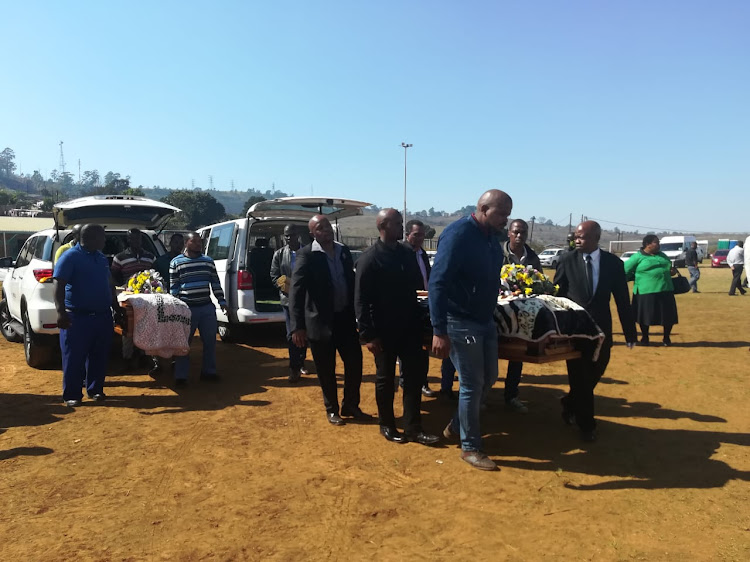 Pallbearers carry the coffins of Ayakha Jiyane as well as her siblings, Kuhlekonke, Khewzi and Siphesihle Mpungose, into the Copesville Grounds, outside Pietermaritzburg, on Sunday.
Image: Nhlanhla Mabaso

Pinetown mother Xolisile Mpungose should have been celebrating the 17th birthday of her eldest daughter, grade 11 schoolgirl Ayakha Jiyane on Sunday.

But there was no cake or presents. Instead, on the day, the inconsolable mother was staring at the flower-draped caskets containing the precious bodies of Ayakha as well as her three other young children, at a marquee on the grounds adjacent to the Copesville Community Hall outside Pietermaritzburg.

Xolisile found the lifeless bodies of Kuhlekonke, 4, Khwezi, 6, and Siphesihle Mpungose, 10, hanging at their Wyebank home when she went home on Tuesday afternoon. Around the same time as she made the shocking find, Ayakha, an academic achiever at Pinetown Girls' High School, went missing after she was fetched from school. A manhunt led to a gruesome discovery - her lifeless body near some bushes in New Germany. She had been strangled with the belt of a bathrobe.

Sbu Mpungose limped into the Pinetown magistrate's court on Friday, two days after he was caught hiding in bushes and arrested for the deaths of his ...
News
2 years ago

There were loud cries from the mourners as the coffins made their way into the venue, which was filled by about 1,000 people. These included pupils from Pinetown Girls' High and Pinetown Boys' High as well as Sithokozile Secondary School where Xolisile Mpungose teaches.

Sbu Mpungose - Ayakha’s stepdad and the biological father of the three other children - was discovered hiding in KwaDebeka by police on Wednesday. Mpungose, 44, was arrested and made a brief appearance in the Pinetown Magistrate’s Court on Friday. The man, who wept often during the short proceedings, was represented by Legal Aid and abandoned his bid for bail. He was remanded in custody and will appear in court next month.

"If anything happens just know I was kidnapped or something has happened to me." These were the last words Ayakha Jiyane uttered to her friends ...
News
2 years ago
Next Article