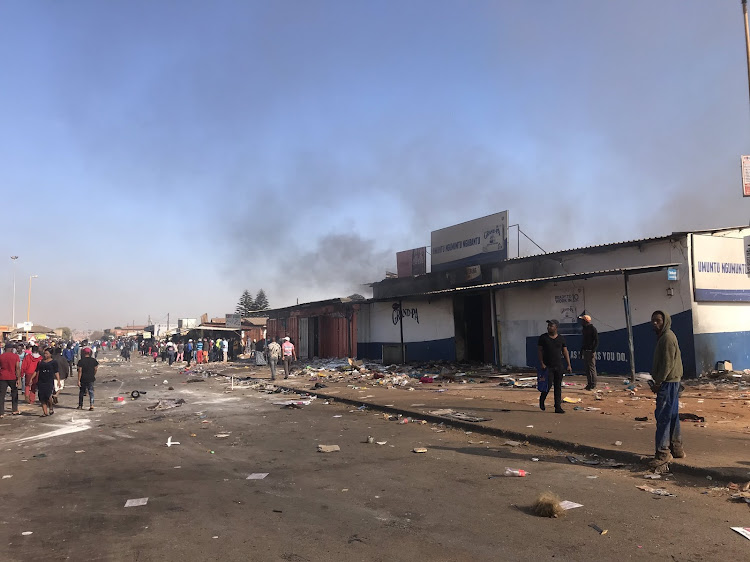 Looting of shops in Tembisa on the east rand began in the early hours of Monday morning
Image: Tankiso Makhetha

Several foreign owned shops have been looted in Tembisa over night. Residents of the township on the East Rand said they were avenging the killing of a Pretoria taxi driver allegedly by a foreign national.

The looting spree started before midnight on Sunday. Residents  also said they wanted to rid townships of foreigners.

One of the residents Nhlanhla Nkambule told SowetanLIVE that they were fed up with foreign nationals in their community.

“They come here and sell drugs to our children. They also killed a taxi driver in Pretoria because they want to sell drugs,” Nkambule said.

But other residents said they did not know what had triggered the looting of shops.

Ekurhuleni MMC for Community Safety Frans Mmoko said  the situation was contained before it spread to other parts of the township.

“We have managed to keep the situation localised in one area. We don’t want it to spill over to other parts (of Tembisa) and we will be camping here to make sure of that,” he said.

#Thembisalooting a resident tells me that they don’t understand what triggered the looting. Says those behind the lootings are not residents in the area @SowetanLIVE pic.twitter.com/1g98FceTna

Mmoko said he suspected that the lootings are a result of messages that were circulated on social media about a possible shutdown in the township.

“We have unconfirmed information that people wanted to hijack trucks and block the highways and freeways with them. We didn’t take chances so we placed members at spots we thought would be targeted,” he said.

Meanwhile 41 people have been arrested following incidents of looting and torching of buildings and vehicles in Jeppestown and surrounding areas.

Police spokeswoman Brig Mathapelo Peters said includes the initial four who were arrested on Sunday for public violence, whilst the rest were arrested after they were found in some of the shops busy looting and being in possession of stolen items, 22 in Malvern. Eight suspects were arrested inside one shop in Vusimuzi informal settlement in Tembisa.

Three people have died after a building burnt down and collapsed in Kaal Street Jeppestown ,Johannesburg.
News
2 years ago

Violence is getting out of hand in SA

After the alleged murder of a taxi driver in Pretoria on Tuesday, the colleagues of the deceased took to the street to avenge his killing. This is ...
Opinion
2 years ago

The riots come after three (3) people were on Sunday morning confirmed dead after an old building caught fire and the walls subsequently collapsed.

Gauteng Police Commissioner Lt-Gen Elias Mawela said the death of three people should not justify the actions of residents in Jeppestown and surrounding areas.

“... With such a tragedy, the community should be uniting to assist those affected instead of seeing an opportunity to commit crime,” Mawela said.

Mawela further called upon members of the public to refrain from inciting violence.

“Those who are hell-bent on turning Gauteng into a crime haven will be found and will face the full might of the law.”