MEC urges community to expose those who burnt mobile classroom 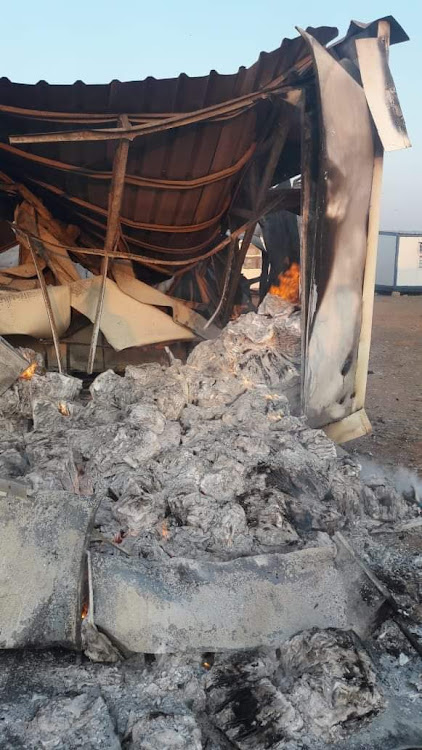 The North West department of education has called on the community of Blydeville to help  in exposing the culprits behind the torching of a mobile classroom.

The call comes after a classroom at Rekgonne Secondary School was burnt on Monday. The MEC, Mmapahefo Matsemela, said she was shocked and dismayed by the incident.

“It is alleged that a mobile classroom used as an administration block by the school in the early hours on the same day was found burnt down to ashes by the community. At the moment the cause of fire is unknown,” she said in a statement.

The department said valuable school documentation had been lost in the fire.

The materials include stationery, textbooks, teacher’s files, a school stamp and 2020 school applications. Pupils’ tasks, sports attire and cleaning materials had also been kept in the burnt classroom.

“I am extremely disappointed by the horrible and barbaric incident of burning mobile classrooms in the area of Blydeville. This act of burning and destroying the school property is literally taking our province behind in terms of addressing infrastructure challenges at our schools.”

“This was a temporary measure since there are plans to build a new school in that area and I wish to appeal to all community members to come forward and report culprits who burn schools to the police”, said Matsemela.

She said the school opened two years ago and had experienced two incidents of classroom burning.

The department said when the school opened in 2017, it started with 141 grade 8 pupils who were accommodated in four mobile classrooms with one used as a staff room and storeroom. Extra mobile classrooms were delivered when grade 9 was added in 2018.

"On 22 July 2019, another mobile classroom was burnt down by the unknown people at the same school,” said Matsemela.

An urgent parents' meeting has been called for Friday.

Storeroom set alight as protests erupt once again at UKZN

Chaos has once again erupted at the University of KwaZulu-Natal's Westville campus following a spate of protests by students.
News
2 years ago

Suspect in hospital under police guard.
News
2 years ago
Next Article