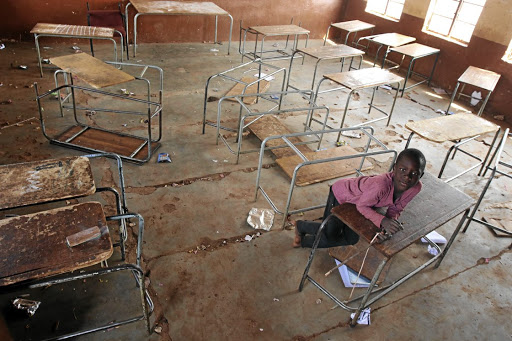 Concerned parents have removed their children from a dilapidated school, halting schooling in GaRatjeke village in Bolobedu, Limpopo, for a week.

The parents have accused the department of education of failing to respond to their demands to build a new school and move their children from the unsafe conditions at Ratjeke Primary School since 2003.

Residents have also shut down Maekgwe Primary and Rama Secondary schools in the area.

The local chief Thomas Selowa said the cracked and dilapidated Ratjeke Primary School was built by the community from mud bricks in 1977.

"We can't keep repairing two blocks on our own. The roof is leaking and walls are cracked, there is no clean water in the school.

"We wrote to the department several times. We told them that we have found a site where the school should be build," Selowa said.

Teachers and learners shut down Zanokhanyo Junior Secondary School in Butterworth, in the Eastern Cape, on Monday.
News
1 year ago

Selowa said parents have resolved to continue with the school shutdown until the government commits in writing that a new school would be constructed.

Pupils were seen loitering in the streets of the village.

Speaking at a gathering where parents met with officials from Limpopo department of education, Robert Kapa said they had closed the school because it was just a matter of time before it kill learners.

"The department wanted to bring mobile classes and we rejected them because we know they will never build a school," Kapa said.

According to a letter seen by Sowetan, the department approved the relocation of the school in 2015.

"Learners and educators can only relocate once there is approved physical infrastructure at a newly identified site subject to time frames that shall have been determined by the department which will be communicated" read the letter.

The Limpopo Education Department has refuted claims that it has neglected pupils at a high school in the province who are being taught under trees ...
News
2 years ago

The department's head of infrastructure Rapule Matsane said in 2013, former MEC Ishmael Kgetjepe wrote letters to both Ratjeke and Maekgwe primary schools with the intention to merge them due to low enrolment rate.

"We have 226 pupils in Ratjeke with five teachers, while four teachers are responsible for 128 learners at Maekgwe Primary School.

"I'm happy that both communities have agreed to merge the two schools and construction for the school will commence in 2021," said Matsane.

Selowa said they were opposed to a merger of the two schools.

"If parents from Maekgwe want to take their children to our school, they are welcome to do so, but we are not going to rename the school," he said.

Matsane said the department will provide feedback next week.

"For many years I have been attending endless meetings with various stakeholders and it's promise after promise," Seshoka said.

A primary school in Pietermaritzburg has suspended lessons to conduct a "deep sanitisation" of its classrooms following confirmed cases of the H1N1 ...
News
1 year ago

SAHRC says it will hold government accountable after a walk way collapsed at Hoërskool Driehoek School in Vanderbijlpark on Friday.
News
2 years ago
Next Article