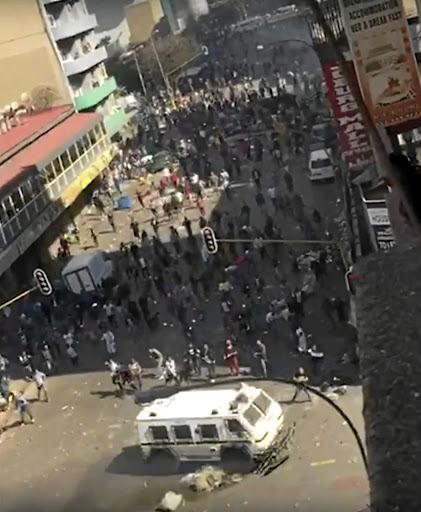 Small business development minister Khumudzo Ntshavheni will introduce a registry of informal traders and small business enterprises in a bid to regulate the industry.

Ntshavheni, who was addressing the media at the Johannesburg Central police station yesterday, said she wanted to understand the extent of the problem with counterfeit goods in Johannesburg.

This comes after law enforcers were pelted with rocks and forced to retreat in a failed attempt to confiscate counterfeit goods in Smal and Jeppe streets in the CBD last week.

"The ministry has agreed to do a register on informal traders as well as small business enterprises.

"From that register, we want to then give permits for people to operate in certain categories because we cannot have an industry that is not regulated," Ntshavheni said.

The minister said representatives of various brand owners informed her that millions of rands have been lost through the sale of counterfeit goods.

"They told us that between December and July this year they have already lost R350m because of pirated goods."

Ntshavheni blamed SA's porous borders for the huge influx of counterfeit goods and said authorities needed to work with their counterparts from neighbouring countries to prevent this phenomenon.

The South African Human Rights Commission has condemned the attack on law enforcement officials in the Johannesburg CBD on Thursday.
News
3 years ago

The street battle between police and enraged street vendors in the Johannesburg CBD could have ended in a "bloodbath", police said on Friday.
News
3 years ago

"If you take note of how these goods enter the country, it is not through the normal ports of entry like OR Tambo [International Airport] or the seaports. They come in from the borders we share with other countries," she said.

"There is also an element of manufacturing also happening in the CBD and these are things we need to look at with other departments."

Johannesburg Central police station commander Brig Ivan Perumal said goods that were confiscated during raids were booked in as evidence and either returned or destroyed depending on the outcome of court cases.

Traders had claimed that police confiscated their goods and resold them to their competition.

Ntshavheni, along with a contingent of heavily armed police officers, visited the site where chaos broke out last week. Some informal traders rushed to close the doors to their shops as they anticipated another raid.

Hakim Mohammed, who rushed to close his shop, said: "You don't know what they want. I don't want to take chances, that's why I closed my shop."