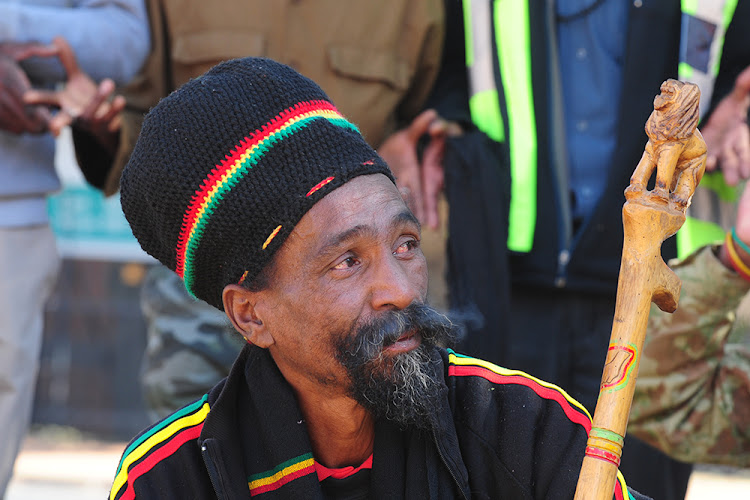 Kongo Shale listens attentively as a memorandum is read outside the offices of the Sunday Times in Johannesburg on Thursday, August 1 2019.
Image: Thapelo Morebudi

Aggrieved members of the Rastafarian community protested outside the offices of the Sunday Times in Johannesburg on Thursday to voice their displeasure at a news report that cast negative aspersions on their religious and cultural beliefs.

Their anger was directed at an article published on July 14 which referred to an “unemployed, dope-smoking Rastafarian” as being a key source for public protector Busisiwe Mkhwebane's explosive report on public enterprises minister Pravin Gordhan and the Sars “rogue unit”.

“This inflammatory and damning statement is orchestrated and intended to cast and brand a bad image and standing of the latter of being a Rastafari specifically but also to equally cast such negative aspersions to every Rastafari religious and cultural community at large,” said a memorandum handed to a representative of the newspaper.

The memorandum demanded a written apology, by the author of the article, in the newspaper and urged the Sunday Times to desist from casting the Rastafarian community as a people of “lesser or no value at all”.

“I am a lawyer by profession and my name has been tarnished, my integrity has been attacked,” Manyike said in an interview with radio 702 after the article was published.

Three senior SA Revenue Service executives have been suspended due to "serious allegations of misconduct".
News
2 years ago

If judges fail to exercise discretion and guide affairs with decorum, they are going to lose credibility in society.
Opinion
2 years ago

The Sunday Times said, in an apology on Thursday: “Sunday Times respects the Rastafarian movement as an integral part of the South African community.

“We recognise and respect Rastafarianism as a social, religious, cultural and political movement that emerged in response to the exploitation and oppression of black people in much of the world, including South Africa.

“We accept that mentioning Manyike’s Rastafarian affiliation in the story may have created the impression that this affiliation had a bearing on his integrity and on the substance of the story. This was not the intention, and we apologise for any offence this may have caused.”