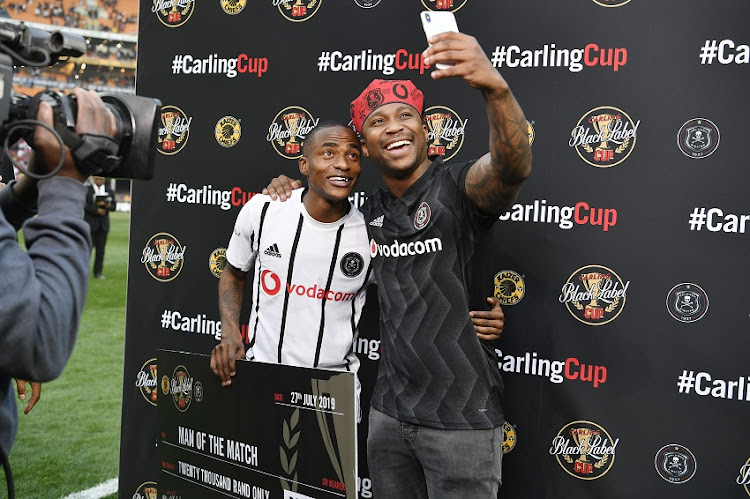 Thembinkosi Lorch sat on the sidelines as his Orlando Pirates teammates were put through their paces at training at Rand Stadium on Thursday and has a 50/50 chance of playing against Bloemfontein Celtic on Saturday.

Lorch was joined on the sidelines by right-back Mthokozisi Dube on Thursday and coach Milutin Sredojević revealed that the move to isolate the pair from training was a precautionary measure.

“It was just a precautionary measure to put them aside in order to not aggravate their injuries. The two of them are supposed to pass a late fitness test tomorrow [Friday] before they could be declared ready or not ready for the game against Celtic‚” said Sredojević after the team’s training session.

“During the Carling Cup [against Kaizer Chiefs on Saturday] Dube had a collision with Bernard Parker and it was just a precaution to put him aside.”

Pirates open their Absa Premiership season with a home clash against Celtic at Orlando Stadium (kickoff 6pm) as they seek to win their first league title in seven years.

Celtic‚ who took four points from Pirates last season with a win and a draw‚ have also made several signings to improve their squad and Sredojević is fully aware of the challenge the visitors from Bloemfontein will pose for his team.

“We are fully aware that we are playing against a team that finished in the top eight and are coached by our former captain‚ Lehlohonolo Seema‚” the coach said.

“We want to surpass the 57 points we got last season‚ we want to do better than the 44 goals we scored and we want to concede less than the 24 goals that we have conceded last season.”

Sredojević is confident the new arrivals will turn the fortunes of the club around after finishing as runners-up in the last two seasons‚ with Mamelodi Sundowns piping them on both occasions.

On paper Pirates appear to have made strong signings‚ but are they the right players to help them win the 2019-2020 Premiership?

“The club has brought the missing puzzle pieces in the mosaic of Orlando Pirates. We shall see what football will pay us back for the enormous investment‚ sleepless nights and hard working days‚” Sredojević assured.

“I would like to invite the supporters to come to the stadium on Saturday with a new spirit to be that player No 12‚ and helping us to start the season on a positive note.”

Pirates have three players who starred for Celtic last season in Kabelo Dlamini‚ Bongani Sam and Tshegofatso Mabasa among their squad to add to nine other signings that the Buccaneers have made ahead of the new campaign.