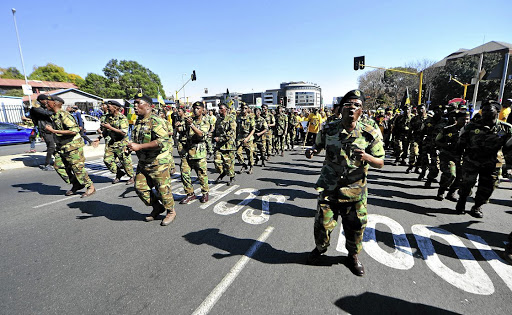 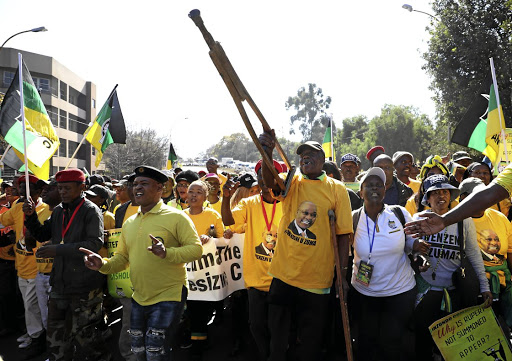 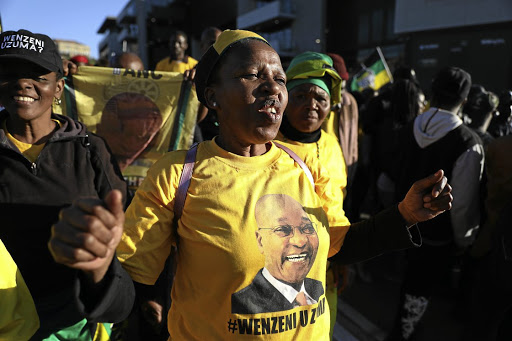 Scores of people - some clad in yellow T-shirts bearing Jacob Zuma's face - sang and danced all day, showing support to the former president.

Others like the MK Veterans Association who were draped in military attire, spent the whole day united in song and slogans as Zuma testified before the state capture commission of inquiry.

They came from different structures of the ANC including the Radical Economic Transformation Champions, party branches from Gauteng, Limpopo, KwaZulu-Natal as well as student movement Cosas. The latter raised eyebrows as they had, among them, pupils in school uniform.

The department of education in Gauteng had not responded to questions by the time of going to print, but Cosas provincial secretary in Gauteng, Teboho Magafane, said the pupils did not bunk school for Zuma.

Zuma allies stand by their man at state capture inquiry

Jacob Zuma controversial supporters, some of whom are out in the cold, came out to back him at the state capture commission in Parktown, ...
News
2 years ago

He said they joined the Zuma supporters while on their return from submitting a memorandum at Prasa to highlight issues including that they arrive late at school because of their trains.

"What we want to say as young people is what Zuma told us, that education comes first. So today those kids did not bunk school because of president Zuma," Magafane said.

Magafane said they were supporting Zuma as he was being projected negatively, "since he had been in exile, by spies and white monopoly capital".

Former North West premier and a Zuma loyalist, Supra Mahumapelo, said there were people who sought to destroy Zuma's legacy. He said various achievements by Zuma including ensuring access to ARVs to people living with HIV/Aids were downplayed.

"As we speak today, life expectancy in South Africa has gone up. Even when you go into the manifesto of the ANC, you will see that one of the reasons people voted for the ANC is because under his leadership life expectancy went up.

". these facts that I'm talking about, please say so tomorrow that I'm not talking the truth because that is the truth and there is no truth that is more than that truth. That under Msholozi, South Africa became better than it was ever before. You may not like it, you may hate him for your reasons but when truth is supposed to be told please tell the truth," said Mahumapelo.

Maphatsoe said there had not been any evidence at the commission which has directly incriminated Zuma.
News
2 years ago

Former president Jacob Zuma has arrived at the state capture commission of inquiry in Parktown, Johannesburg.
News
2 years ago

Former president Jacob Zuma was the one who proposed the formation of the Gupta-owned The New Age and ANN7 to the influential family.
News
2 years ago
Next Article