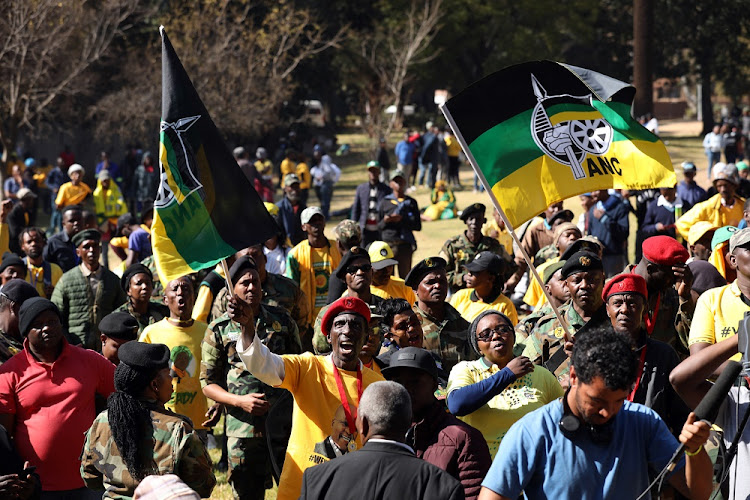 Former ANC president Jacob Zuma's supporters gathered to show support for him as he gives testimony at the state commission of inquiry in Parktown, Johannesburg on Monday, July 15 2019.
Image: Sandile Ndlovu

Hundreds of former president Jacob Zuma's supporters have gathered outside the state capture commission of inquiry where he is appearing.

Zuma is giving testimony following allegations made by a number of people who have testified before the commission. His supporters came out in their numbers on Monday to show support for Zuma, who they say is being persecuted.

Gorbachev Dyodo, who identified himself as Radical Economic Transformation Forces chairperson and secretary of Umkhonto we Sizwe Military Veterans Association, said  they believed the commission was being used to fight ANC battles.

The supporters sang and danced at a park near the commission’s venue. They wore ANC regalia with some in T-shirts bearing Zuma’s face. They had a full programme which will take place as Zuma continues his testimony. Zuma is expected to address them when he is done for the day.

Maphatsoe said there had not been any evidence at the commission which has directly incriminated Zuma.
News
2 years ago

Dyodo said they wanted Zuma to know that he enjoyed their full support. “We are here because there is a notion that suggests because Zuma comes from KZN when he appears here there’s nobody who’s going to support him. So we’re coming here in our own right as ANC members to come and support [former] president Zuma,” he said.

The ANC has previously said that members should refrain from wearing party regalia when they support Zuma. Dyodo said they would dress as they pleased and that no one could dictate what and where they wore their clothing.

“We are ANC members in our own right. We will wear these things. We are black, green and gold like any other ANC members so there’s nobody who’s more black, green and gold than any other member. We’re all equal, we pay the same membership that everybody is paying. So we’re going to wear our ANC things, not outside the ANC but in ANC structures. We’re going to wear ANC things and say these things in the ANC itself,” he said.

Former president Jacob Zuma was the one who proposed the formation of the Gupta-owned The New Age and ANN7 to the influential family.
News
2 years ago

The ANC has expressed its support for former president Jacob Zuma who is appearing before the state capture commission of inquiry in Parktown on ...
News
2 years ago
Next Article