M1 bridge refurbishment to be completed by the end of August 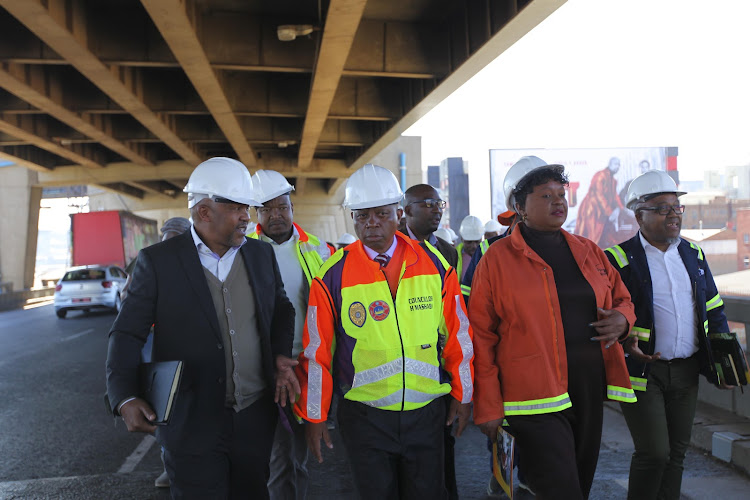 City of Joburg mayor Herman Mashaba on Wednesday revealed that renovations on the M1 bridge would be completed ahead of schedule.
Image: Alaister Russell

Johannesburg mayor Herman Mashaba announced on Wednesday that the M1 Double Decker Bridge refurbishment would be completed ahead of schedule.

Now‚ the project will be completed by the end of August.

The mayor‚ with MMC for transport Nonhlanhla Makhuba‚ visited the bridge on Wednesday to assess the progress of the rehabilitation project managed by the Johannesburg Roads Agency (JRA).

The JRA undertook to rehabilitate the bridge after flooding caused by inadequate stormwater infrastructure‚ as well as the destruction of bridge parapet rails by vandals‚ damaged it.

It was estimated that the construction period for the repairs would be 22 months‚ from February 5 2018 to December 4 2019. But on Wednesday‚ the mayor announced that the bulk of the R130m project had already been completed.

Mashaba pre-empted the announcement with how he had inherited the burden of crumbling infrastructure from the previous city administration‚ the ANC.

"It is not humanly possible to resolve the issues of the crumbling infrastructure of the city overnight.

The JRA says it will cost more than the budgeted R160m to rehabilitate the M2 motorway between the Crown Interchange and Maritzburg Street - but is ...
News
2 years ago

"As I previously stated‚ only 6% of the bridges in the city are in good condition ... Next month the inner city will resemble a construction site as we begin fixing it. There are some 4‚000km of roads and bridges that need to be fixed and we just don't have it in our budget to fix them all.

"The repair on this bridge will help alleviate the backlog caused by the closing of the M2 bridge. It is crucial to our economy that these bridges are repaired ... I couldn't believe it when I heard the M1 would be completed ahead of schedule. Now if we can do the same with the M2‚" Mashaba said.

The M2 motorway between Crown Interchange and Maritzburg Street was closed from February 28 this year to allow for bridge rehabilitation to resume.

The result has been a daily backlog on the roads as traffic coming from the south of Johannesburg is diverted around the city.

In February‚ the JRA flagged its concern that 94% of Johannesburg bridges needed immediate intervention.

According to the roads agency‚ a staggering R6.5bn is needed to refurbish all the city's bridges.

Mashaba said the city was facing an overall infrastructure backlog of R170bn.

The M2 bridge rehabilitation will be finished by the end of October.
News
2 years ago
Next Article