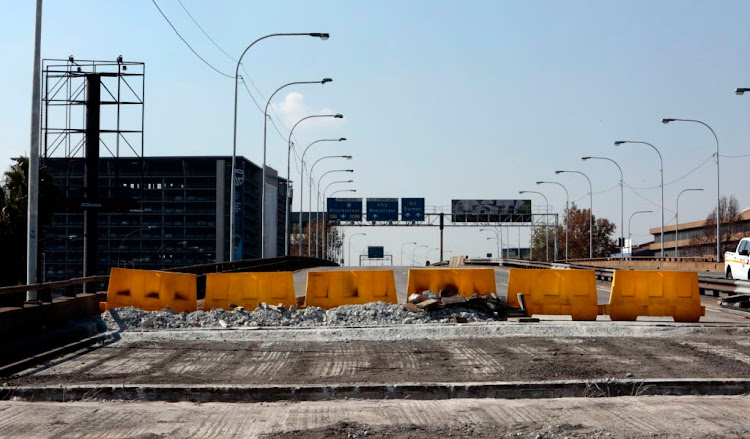 The Johannesburg Roads Agency said on Thursday that upgrades to the M2 bridge south of Johannesburg - which was closed due to fears of a possible collapse - were on schedule.
Image: Sebabatso Mosamo/Sunday Times

The M2 bridge rehabilitation will be finished by the end of October.

This was the assurance from the Johannesburg Roads Agency (JRA) on Thursday. The agency said it would stick to its initial deadline in rehabilitating the M2 between the Crown Interchange and Maritzburg Street, which had been been closed since February.

The comment comes after reports that there had been no work taking place on the site.

JRA's spokesperson Siyabonga Nodu denied the reports, saying a quarter of the work had been done and that construction was still under way.

"The demolition of the failed bridge structural element is at 90% and the installation of the jacking system at Selby Bridge has been completed," he said.

Nodu made the comment during a walkabout on the west-bound and east-bound sections of the bridge. He said the milling and exposing of the existing asphalt to allow for further drainage investigation was under way.

"The overall project is on schedule and will be completed by October 30 2019 as planned," he said.

There appeared to be no construction workers on site this week at the bridge between on the M2 highway in Joburg - despite it being closed since ...
News
2 years ago

The bridge was closed after mayor Herman Mashaba raised concerns last year over the stability of the Karzene and Selby sections of the M2 bridge, which posed a threat to road users.

The JRA previously flagged its concern that of the 902 bridges managed by the city, only 6% were in good condition. It said the remaining 94% needed immediate intervention.

JRA's operations manager Bongani Mhlotshane acknowledged that homeless people continued to live under their bridges but that the JRA had no jurisdiction to remove removing them. Relevant authorities had been alerted to the problem.

When the project was started, scores of homeless people were removed and barred from staying under the bridges, but it appears they have moved back as a number of boxes, clothes and blankets could be observed.

When TimesLIVE visited Selby bridge, four people could be seen sleeping there. A bigger group could be seen at the Karzene bridge.

Reluctant to speak, they could be heard mumbling, "We won't leave".

Vandalism and crime were cited as contributing factors to the bad bridges.