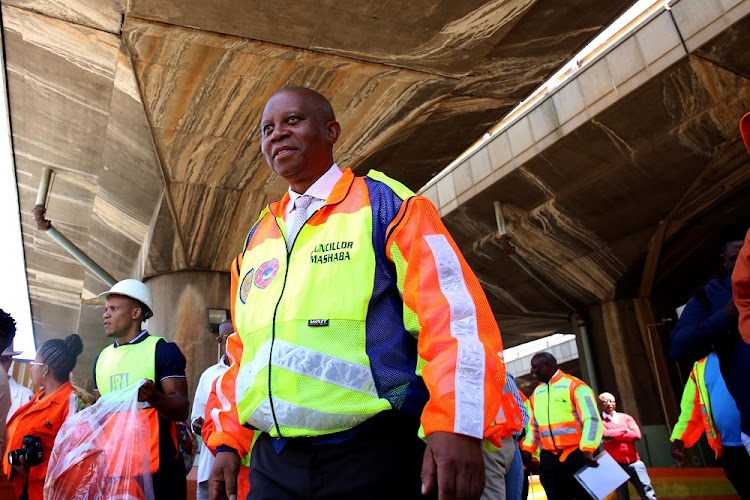 Joburg mayor Herman Mashaba during a visit to the M2 bridge on February 18.
Image: Thapelo Morebudi

There appeared to be no construction workers on site this week at the bridge between the Crown Interchange and Maritzburg Street on the M2 highway in Joburg - despite it being closed since February for rehabilitation.

Instead, a visit to the site by SowetanLIVE sister publication Times Select this week revealed that homeless people – who were evicted before work started on the site – are back living underneath the bridge.

A leaked document from the City of Johannesburg seems to suggest that no work has been done in the three months since the M2 was closed for rehabilitation, although the Johannesburg Roads Agency (JRA) denied this.

The City of Johannesburg has taken the decision to shut down the M2 Bridge after engineers declared parts of the bridge a high danger risk for ...
News
2 years ago

JRA spokesperson Zoleka Jika said a quarter of the work has been done since the bridge  was closed in February, causing huge traffic congestion in the area.

An internal memo of minutes, dated May 10, shows how city officials at a communications meeting discussed putting a spin on the story. Their suggestions included telling the public about “behind the scenes work” on the project and the tender process.

Following requests for comment, a press conference has been called for Thursday morning to address the situation.

A woman from the east rand fears losing her job because of being late for work.
News
2 years ago

The M2 highway in Johannesburg was closed on the westbound carriage way on Thursday.
News
2 years ago
Next Article