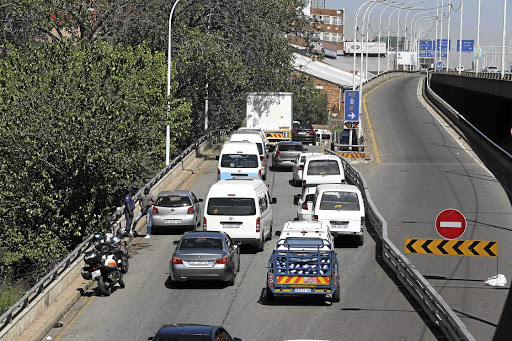 Johannesburg and surrounding areas have been affected by traffic jams since parts of the M2 motorway had been closed for massive repair projects on the road and its bridges.
Image: Thulani Mbele

A woman from the east rand fears losing her job because of being late for work as she gets stuck in peak-hour traffic caused by the closure of parts of the M2 highway.

Ntombizodwa Gexe, 29, told Sowetan she already had two written warnings in under a week.

Gexe, from Vosloorus in Ekurhuleni, who works at a retail store, said she takes a taxi from her township every morning and connects at the Noord taxi rank to Sandton.

"I got my first written warning last week when I arrived at work 30 minutes late. But sadly I got another on Tuesday because I got to work an hour late due to traffic."

Gexe said although she now leaves home an hour earlier, she still takes more than two hours to get to work. "I now fear that any day I'm late again I will be suspended."

Gexe said it was also unsafe to leave home when it's still dark due to people getting mugged and robbed.

The M2 highway in Johannesburg was closed on the westbound carriage way on Thursday.
News
2 years ago

"I can't risk being raped and mugged so I get out of the house when there are people to walk to the taxi rank with."

It's only a week since the City of Johannesburg took the decision to shut down the M2 highway after engineers declared parts of the bridge risky for motorists.

Unfortunately we are all feeling the pressure now

However, the traffic madness has left motorists and taxi operators frustrated due to roads being gridlocked during peak hours.

Mabizela said they have been receiving complaints from passengers who blamed taxi drivers for taking longer routes than usual.

"Unfortunately we are all feeling the pressure now and we call for the Johannesburg metro police and Ekurhuleni metro police to deploy more traffic officers in peak times for assistance as traffic chaos is spiralling out of control.

"Most of our passengers come from townships and walk to taxi ranks around 5am. Let us not expose them to robberies and harm on their way to work."

Johannesburg Metro Police Department spokesperson Wayne Minnaar said: "There are now more cars on the N12 and N3 and we will help as best as we can on congested routes."

Johannesburg Road Agency spokesperson Siyabonga Gebu said: "The repairing of the road is under way and unfortunately there's no turning back and no closed parts of the highway can be opened."