The big e-tolls debate: Cosatu, Makhura and Ramaphosa weigh in 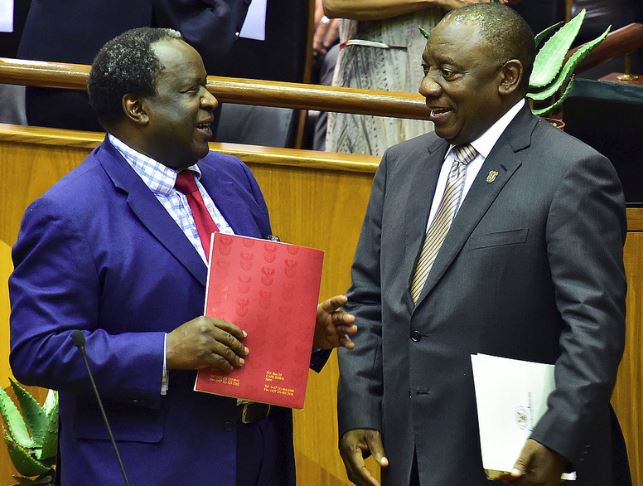 Cosatu has thrown its weight behind GP Premier David Makhura about the future of e-tolls in the province. Finance minister Tito Mboweni told the Sunday Times that he would be meeting with the ANC leadership in Gauteng, upon his return from Rwanda to discuss the matter further.
Image: GCIS

Trade union Cosatu has thrown its weight behind Gauteng Premier David Makhura who maintained during his Sopa last week that he will scrap the tolling system, sparking a massive debate on the issue.

The union's Amos Monyela told eNCA on Sunday that e-tolls is another form of tax, which isn't fair treatment for the province's motorists.

On how the debt, which has reached billions, should be settled, if not through the system, he said finance minister Tito Mboweni must devise an alternative plan which will see the debt being paid.

"The minister must come up with the alternatives of making sure that this thing is paid. So when we pay for e-tolls it means we are now triple taxed and that is unacceptable. This is why we have been consistent that they must look into other alternatives."

According to Makhura, e-tolls will soon be a thing of the past.

"We remain determined to ensure that e-tolls are not part of the future of our province. We are even prepared to contribute something as the provincial government to ensure the e-tolls are scrapped. There is no turning back," reiterated Makhura.

But this did not sit well with Mboweni, who on Thursday last week, posted a series of tweets, some which have been deleted, saying the system should have been introduced with the understanding that it needed to work for government, in that it would yield profit in the long term, as it was an investment.

In fact, before I plant avocados today, I should do so knowing that I will harvest in ten years’ time or so. I need certainty that the policy environment will be supportive of my long term investment as an avocado farmer. Policy uncertainty stops bold risk taking investment.

Transport minister Fikile Mbalula chimed in, in an effort to rein in Mboweni, by asking that they discuss the matter privately so they would give the public a unified response, as instructed by President Cyril Ramaphosa.

Minister shouldn't we discuss this matter as directed by the President first ? And thereafter after engagement with all stake holders we can then present a collective view to society ? You debating here on twitter will further poor water to an already polarized debate .

Makhura stuck to his guns as he dismissed Mboweni's rants in an announcement that he had engaged with President Ramaphosa, and Mbalula on the matter.

I have referred the e-tolls matter to President@CyrilRamaphosa for final resolution; My engagements him and Minister @MbalulaFikile have been positive. Minister @tito_mboweni can continue to tweet as he cooks; he is a Minister, not the President. #NoTurningBack

On Saturday, Mboweni told the Sunday Times that he would be meeting with the ANC leadership in Gauteng, upon his return from Rwanda, Kigali to discuss the matter further.

"The president regards the public exchanges between minister Mboweni and the Gauteng provincial government as most unfortunate. As leaders, they have failed to conduct themselves in a manner befitting the stature of their offices and the high regard which society accords them, and this the president finds deeply regrettable."