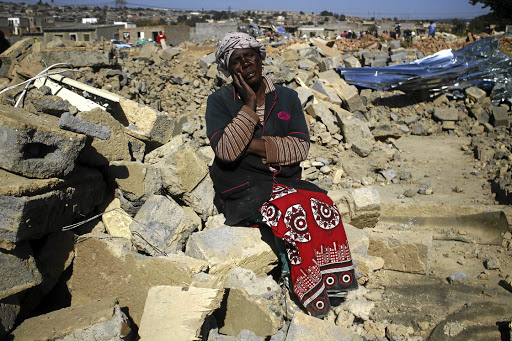 Liza Modiba's efforts to put a shelter over her grandchildren's head were reduced to a pile of rubble after evictions were carried out in Alexandra, northern Johannesburg.

Yesterday, Modiba, 58, was among many residents who were still picking up the pieces after their homes were demolished on Friday morning, apparently because their houses were built too close to the Jukskei river.

The Gauteng government had announced that alternative accommodation would be provided after more than 100 families were displaced by the Red Ants.

Modiba, who built the four-roomed house from the money she made from selling vegetables and fat cakes, said she was angry at the government.

She said she rushed home after receiving a call from a neighbour informing her that houses were being demolished in their area.

"I want them to replace my home so I can have a place to stay with my grandchildren. My heart is so broken, I can't even sleep or eat," Modiba said.

A few items, including a broken bed, stove and cooking utensils could be seen among the rubble.

The behaviour of the people of Alexandra must be condemned in all possible terms.
Opinion
3 years ago

Modiba said she was trying to look for her ID and the birth certificates of her three grandchildren aged 5, 11 and 13-years.

She said the demolitions happened while she was at the market where she sells her produce.

"When I got here, I tried to run into the house through the garage door but they pushed me away," she said.

Modiba said she was carried to the other side of the area after fainting.

"When I regained consciousness, my clothes were wet. People told me that they poured water over me because I had fainted."

Modiba said she was now staying in a shelter. "We have to share one small blanket. It gets cold at night," she said.

Another resident Bongani Makhoba, 36, said he had to send his wife and two children to stay with relatives after their home was demolished.

Makhoba said he was able to salvage one bed from the destruction but everything else was lost. He said he wanted the government to pay for his damaged belongings.

The ANC released a statement on Saturday, describing the evictions as inhumane and blaming the EFF and the DA-run Johannesburg municipality.

"The actions of the DA/EFF alliance smacks of opportunism and cheap electioneering to displace our African masses, exposing them to harsh conditions of the winter cold," it stated.

However, EFF provincial chairperson Mandisa Mashigo, who was in the area, said yesterday the ANC was spreading lies. She said her party was supporting land occupations and would not call for people to be evicted illegally.

Mashigo said it would open a case and lodge complaints with the office of the public protector and the SA Human Rights Commission today.

Last Thursday evening Sibusiso Vumase was entertaining guests when he heard a loud knock on his front door.
News
3 years ago

'You can take me out of my house when I am dead,' says Alexandra resident facing mob eviction

An Alexandra man says he is willing to die for the house he was rightfully allocated by government - this after community members tried to evict him ...
News
3 years ago

'We will not vote if this is how we are treated,' say shack dwellers after homes demolished

JMPD and an army of Red Ants - carrying crowbars, riot shields and rubber bullet guns - demolished about 1,000 shacks on two properties in Rabie ...
News
3 years ago
Next Article