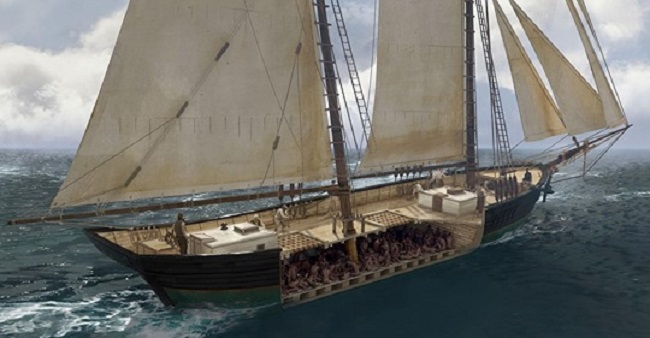 The Clotilda, the last ship to bring enslaved people to the United States, has been discovered along the Mobile River in Alabama.
Image: Alabama Historical Commission/ Facebook

The last ship known to smuggle slaves from Africa to the United States has been discovered in Alabama's Mobile River, nearly 160 years after it was deliberately sunk, a historical commission said on Wednesday.

The Alabama Historical Commission, in a post on its Facebook page, called the effort to locate the ship, the Clotilda, a "yearlong scientific investigation."

The Clotilda was discovered by a company called SEARCH Inc in collaboration with the commission and the Smithsonian National Museum of African American History and Culture.

The Clotilda has previously been documented by historians as the last ship known to bring African captives to the United States. It operated in secret, decades after Congress banned the importation of slaves into the country in 1807.

The Clotilda carried 110 men, women and children from Africa to Alabama in 1860, according to the 2007 book "Dreams of Africa in Alabama" by Sylviane Anna Diouf, who relied on testimony from the slave traders and their captives.

The ship is believed to have been intentionally sunk in 1860 to hide evidence of its use in the slave trade.

Three years later, in the middle of the Civil War, President Abraham Lincoln signed the Emancipation Proclamation declaring the end of slavery in the United States.

"The discovery of the Clotilda sheds new light on a lost chapter of American history," said Fredrik Hiebert, archaeologist-in-residence at the National Geographic Society, which supported the search.

Researchers used insurance records to determine the Clotilda's dimensions and its other unique characteristics, such as planks of southern yellow pine over white oak frames, according to National Geographic.

The team behind the search for the Clotilda discovered a ship with its identifying features under water in a section of the Mobile River, according to National Geographic.

A representative from the Alabama Historical Commission could not be reached for comment late on Wednesday.

Among the captives on the Clotilda were Cudjo Lewis, who lived until 1935 and was long described as the last survivor of the Atlantic slave trade between Africa and the United States.

Earlier this year, researcher Hannah Durkin of Newcastle University in Britain published a paper naming the last known survivor as Redoshi, who also went by the name Sally Smith.

She died in 1937, two years after Lewis, and also was a captive of the Clotilda, according to Durkin's findings.