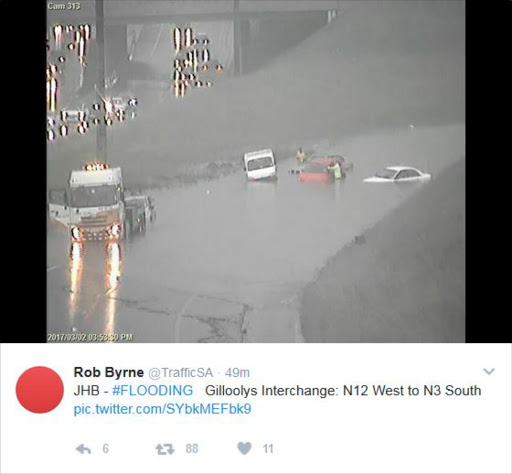 At least one person has died as a result of the heavy downpour in Johannesburg on Thursday afternoon.

Details surrounding the incident were not immediately clear.

Meanwhile‚ parts of Johannesburg are now submerged in water.

“The Gillooly’s interchange is flooded and is affecting traffic in a southerly direction on the N3‚” said Minnaar.

“Motorists can use the M1 And M2 as alternative‚” he said.

The City of Johannesburg has issued a warning for heavy flooding.

The JMPD said it was also keeping a close eye on the Roodepoort area.

Traffic was already backed up on several roads.

Motorists were urged to drive with caution‚ keep their headlights on and reduce speed on the roads.