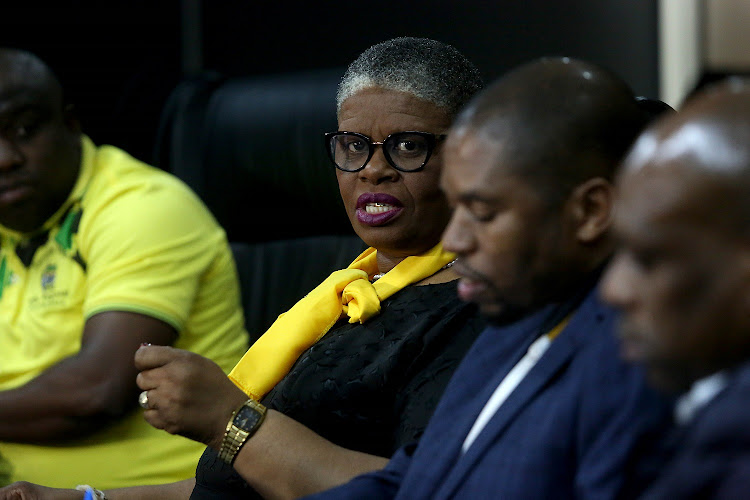 The IFP has joined the chorus of those who are calling for embattled eThekwini mayor Zandile Gumede to step down pending charges against her relating to the R208m Durban Solid Waste tender scandal that has rocked the city.

The IFP has also called for an independent inquiry to examine all corruption allegations following Gumede's arrest and reports that Hawks investigators are preparing to move on 62 councillors from eThekwini municipality who are implicated in the same tender fraud and corruption.

IFP secretary-general Velenkosini Hlabisa said in a statement on Monday: "The fight against corruption in eThekwini must be intensified now‚ before the rot is allowed to affect the whole political and public sector. The mayor of eThekwini must step down‚ otherwise the agents and objects of corruption will unite in their efforts to preserve the status quo in the metro."

The IFP‚ which regained its status as official opposition in the KwaZulu-Natal provincial legislature at this month's elections‚ said it was time for the ANC to "walk the talk and send a clear message against corruption and corrupt politicians and officials".

"The mayor of eThekwini must be given time to focus on these serious allegations. The investigation will negatively affect her leadership in leading the metro. The bail conditions will effectively make her not fulfil her responsibilities to the fullest. eThekwini needs a leader who will have undivided attention as the city is engulfed by numerous challenges‚" said Hlabisa‚ referring to Gumede's stringent bail conditions.

The party also urged the Hawks to "deal with this matter to the core‚ with no fear or favour".

"We are watching the way criminal justice is being compromised in this province. We are still waiting for the naming and shaming promised by [Harry Gwala district mayor] Mluleki Ndobe‚ who after his release on allegations of murder promised to name people who used the state apparatus against him.

"Until he does that‚ the cloud will remain hanging over his head. We hope that the case against the mayor of eThekwini will not go the same route as Ndobe's case did and drag on. Action is required now‚" said Hlabisa.

Ndobe‚ Sikhosana and three other men — Sibonelo Myeza‚ Mbulelo Mpofana and Mxolisi Ncalane — had been arrested for the 2017 murder of Magaqa and the attempted murder of councillors Jabu Msiya and Nontsikelelo Mafu.

eThekwini mayor Zandile Gumede will not spend a night behind bars after she was granted R50 000 bail following her court appearance on charges ...
News
3 years ago

With calls mounting for Gumede to step down after her arrest‚ the embattled mayor has refused to quit over what she called "mere allegations".

She met members of ANC provincial structures at the weekend to state her side of the story and appeared unfazed by calls for her to step down.

She told eNCA on Sunday after the meeting: "I’m so fortunate that I'm one of the leaders of this glorious movement of which everything is done through protocols. Today we had a good meeting with officials and they want to understand what happened."

When asked whether she had been sacked‚ she replied: "No‚ there is no such thing ... as media you must learn to take it from the horse's mouth as you're doing today. For now‚ I've met leaders and I went to court and then that's it."

The ANC said in a statement last week that it would await the outcome of the judicial proceedings before deciding on Gumede's fate.