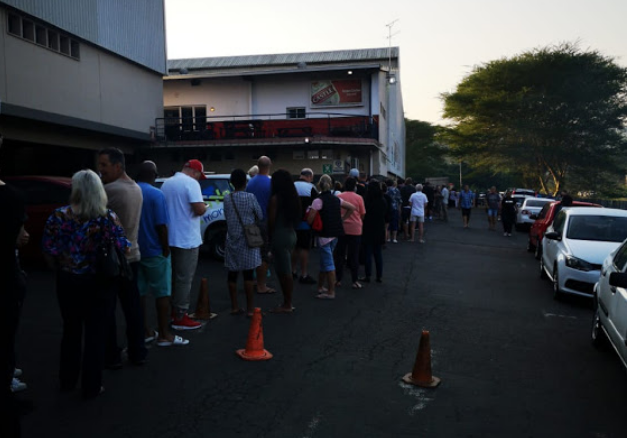 Despite various issues - which included five voting stations not being open by late afternoon, shortages of ballot boxes and confusion over fake nails - the Electoral Commission said on Wednesday it was satisfied with how voting had gone.

Some, however, weren’t so happy.

After eagerly waiting in a queue to cast her vote, a Soweto woman said she was turned back from a voting station because of her manicured nails.

Despite the Electoral Commission notifying its officers that the ink used to mark the fingers of those who had voted would not be affected by manicured nails, the woman explained how she had to ask for the intervention of the station manager.

“I was told they won't let me vote if they don't ink my nails,” she wrote on Facebook.

“I said they can ink at the bottom they said they need to ink the nail. So I asked, ‘What difference does it make?’ They told me to vote [in the] next elections. I had to take a request to speak to their station manager to get this sorted. According to the rude man, it's their IEC rules,” she said.

She was eventually allowed to cast her vote.

From one of the oldest men in South Africa, to a 21-year-old first-time voter voting where Nelson Mandela cast his ballot for the first time- two special South Africans share their reasons for making their mark in this year's election.

It was a similar experience for EFF leader Julius Malema’s wife, Mantwa Matlala-Malema, who was told to remove her fake nails before she could vote.

The pair were voting at the Mponegele Primary School in Seshego, Limpopo. Eventually, after Malema complained, Matlala-Malema was allowed to vote with her fake nails.

These were among the hiccups voters faced at the polls - but at a media briefing at 5pm on Wednesday, the IEC said - in its own words - that the polls had gone “smoothly and steadily”.

Voting stations that hadn’t opened by Wednesday evening because of protest action was the biggest problem. Two of the voting stations were in the Eastern Cape, and three in KwaZulu-Natal.

“Efforts to resolve these and provide voters in these areas with an opportunity to exercise their democratic right to vote are continuing and will continue for as long as is necessary,” the IEC said in a statement.

Meanwhile, there were four voting stations in Limpopo that had to be closed just hours after being opened because of unrest and safety concerns.

These had all been re-opened by late afternoon.

"Different queues for blacks and whites" at a Western Cape polling station were nothing of the kind, the Electoral Commission said on Wednesday.
News
3 years ago

The IEC condemned the violence, unrest and disruptions saying it infringed on democracy.

“Reports have been also received of temporary shortages of ballot papers at some voting stations where distribution plans were not fully implemented,” the electoral commission said.

“A factor which contributed to shortages was the ability of voters to cast their votes at any voting station in their province… In most cases shortages were rapidly resolved by the redistribution of ballots and reserve stock and voting resumed quickly.”

The IEC also had to deal with a claim that there were "different queues for blacks and whites" at a Western Cape polling station. But, the commission said, this was simply untrue.

The one queue, the IEC said, was made up of voters registered at the Wellington polling station and the other made up of students registered elsewhere. The students had to fill in a form before they could vote, and a separate queue was decided on to prevent them “clogging up” the voting process.

Throughout the day, the eagerness of South Africans to cast their votes was undeniable - one East London man even abandoning the bedside of his pregnant wife to come and be the first to cast his vote.

On social media, as scores of people shared their inked nails as a sense of pride, some shared the terrible tragedy of not being allowed to vote for one or other reason.

In the North West for example, one man missed this year’s elections because he could not afford to go to apply for a new ID.

Others however, expressed their satisfaction at the service received, not only at the polling stations but also at home affairs offices, which had opened to allow people to apply for temporary IDs.

“I applied and received my temporary ID, and voted, all within the space of one hour in Durban this afternoon. Well done to @HomeAffairs and the @IECSouthAfrica. What a privilege to be able to vote in such a young democracy. Here's to getting back on track #2019Elections,” tweeted one satisfied voter.

On a lighter more positive note, however, President Cyril Ramaphosa rolled up his sleeves and made personal calls to voters, asking them whether they had made their way to the polls already.

"Whisper to me who you voted for, I won’t tell anyone," Ramaphosa joked during telephonic conversations he had with voters at the ANC's voter call centre in Centurion.

Ramaphosa had gone to the call centre where he personally called people to inquire whether they had voted.

"This is Cyril Ramaphosa calling you…You know that today is the day to vote," Ramaphosa said to Ntombifuthi, who said she had just voted for the ANC.

"You voted for me? Oh, thank you. Thank you," Ramaphosa said.

Ramaphosa had a long conversation with another woman who refused to tell him who she had voted for, keeping true to the slogan of "your vote is your secret".

It was not everyone who adhered to this though as despite numerous calls from the IEC to keep their votes a secret, some used their phones to take pictures and videos while they put their x on ballot papers and later uploaded these on social media.

Now, with electioneering being done and the votes being cast, the wait begins for the counting of the votes to be done as South Africa's ruling party will be announced on Saturday, May 11.

He told reporters that there were high expectations and a huge responsibility upon the party and the person who will lead government after the ...
News
3 years ago
Next Article