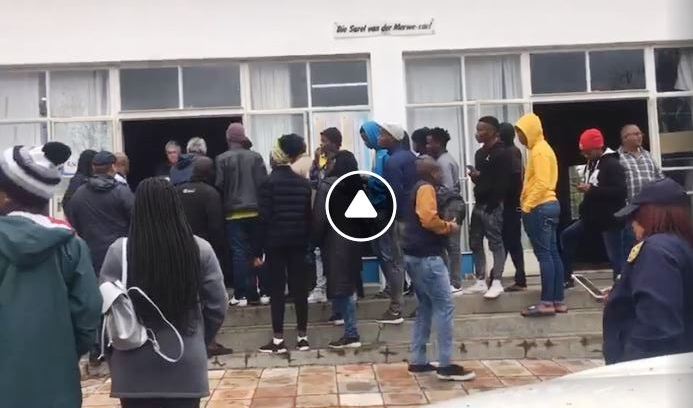 The 'black queue' at a voting station in Wellington consisted of students who were not registered to vote there, the IEC said.
Image: Facebook/Chumani Siimane

"Different queues for blacks and whites" at a Western Cape polling station were nothing of the kind, the Electoral Commission said on Wednesday.

The queues actually consisted of voters registered at the Wellington polling station and students registered elsewhere, the IEC said.

Somewhere in Western cape, Black people are not allowed to stand on same queue with Whites.#racism#SAElections2019 #ElectionDay @AdvBarryRoux @danielmarven pic.twitter.com/rQy3u9f2us

The students, who would have to fill in a "VEC4" form before voting, were asked to stand on one side because there were so many of them.

"Instead of clogging up the whole system, they were kept aside and continued with filling in the VEC4 forms," said Western Cape electoral officer Courney Sampson.

"That explanation actually makes sense to me."

Earlier, the IEC undertook to investigate the voting station in Wellington after a video posted on Facebook showed black and white voters queuing separately, with the person shooting the video denouncing it as racist.

The  video was viewed more than 125,000 times and shared more than 470 times within  three hours of being posted by Chumani Siimane.

Lawson Naidoo, executive secretary of the Council for the Advancement of the South African Constitution, said the organisation had advised IEC officials at several voting stations in the Western Cape to have a separate queue for people filling in VEC4 forms.