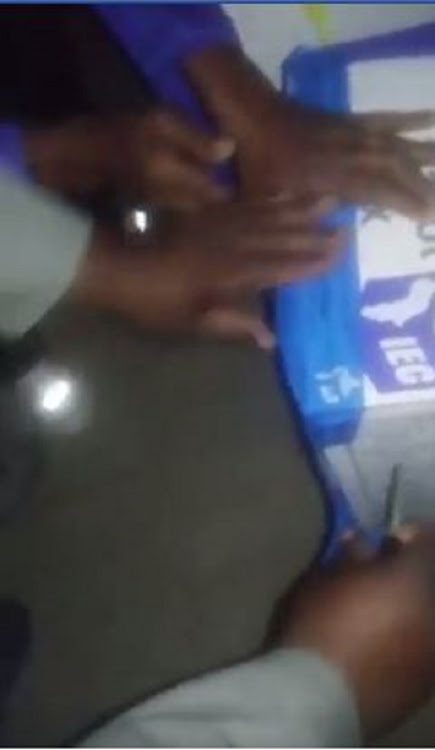 Screenshot of a ballot box being resealed by party agents who allegedly were suspecting that there was something sinister with the ballot box.
Image: Screenshot via Facebook

The ANC in the North West has labelled EFF members as rude, violent and disrespectful people.

This was said by the provincial task team coordinator, who is also the minister of science and technology,  Nkhensani Kubayi-Ngubane on Thursday morning.

“We are seriously worried. We are concerned about the conduct of the party agents of the EFF in voting stations.

“They have been very rude and violent in various instances and they do not have a good approach; they are disrespectful and it's unfair to our members,” she said.

Kubayi-Ngubane was responding to a video circulated on social media on Wednesday night after the closing of the voting station in Atamelang township in Delareyville.

In the video seen by Sowetan, a ballot box was resealed by party agents who claimed  there was something suspect with that ballot box.

IEC chairperson Dr Tumelontle Thiba however confirmed there was no tampering on the box and that what was seen on the video was true.

IEC communication officer Kealeboga Maleshane said it happened at Phatsima Secondary School after EFF party agents suspected there was tampering of the ballot papers and followed the bakkie to the IEC station.

“They were given a tape to reseal [the box] just to satisfy themselves that there was no tampering,” she said.

This happened in Tswaing Local Municipality in Delareyville in the North West Pronvince last night (07/05/2019). The...

But EFF secretary in the province Papiki Babuile said the IEC system was a mess.

“They [IEC] are just trying to paint a picture that the IEC is doing everything right when they know themselves that their staff is a mess,” he said.

Babuile said they have already lodged many complaints with the IEC where there were instances of untrustworthiness.

He said he was happy the EFF’s  party agents were able to pick up such alleged instances and immediately followed the IEC bakkie to its office.

“That is not only the case it is happening across the province. The IEC staff members have taken it upon themselves to wreck processes in order to make sure that they steal votes for the ANC. It is proven in many other occasions,” he said.

Former DA Gauteng MPL Mike Moriarty has described some of the logistical glitches which were experienced by the IEC on election day as inexcusable.
News
2 years ago

He said a ward councillor went to vote at Marikana High School and after voting there he went to another station and voted in Marikana community hall.

Kubayi-Ngubane  said they have also lodged complaints against the EFF with the IEC.

“In Taung they arrived and kicked one of our tables and we lodged a complaint with  the IEC.

“We also had an incident last night where the EFF was trying to get the ballot box in one of the voting stations and our party agents were fearing that they were going to overpower the police because the police did not anticipate that something like that can happen,” she said.

She said if the EFF say the box was tampered with they must tell what the initial seal number was and what was the tampering.

She said she was confident of the ANC retaining the province. “They [EFF] were confident that they were taking the North West and the people of North West have shown their trust in the ANC and we are grateful,” she said.