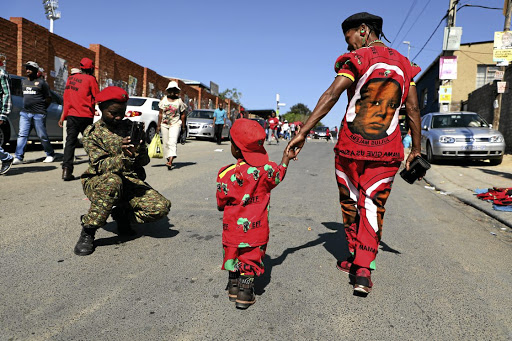 An EFF marshal takes a picture of Ringi Mtshali and his son Tumelo Ngobeni at the May Day celebration in Alexandra.
Image: SANDILE NDLOVU

EFF leader Julius Malema has accused the ANC of neglecting the residents of Alexandra, northern Johannesburg.

Just five days before the national elections, Malema criticised the governing party, asserting that there's no development to show that the party put the lives of poor people at the forefront.

"Alexandra is what South Africa looks like. Anyone who wants to know the black life and what black people are subjected to all over South Africa, you must come to Alexandra.

He was addressing members of his party as well as residents of "Gomorra", as the township is affectionately known, at a packed Alexandra Stadium during the party's May Day rally yesterday.

ANC secretary-general Ace Magashule has called on all governments run by his party to end outsourcing of workers.
News
2 years ago

In what seems to be election rhetoric, Malema claimed that he would arrest President Cyril Ramaphosa for his involvement in the Marikana massacre if the EFF is voted into power. He said all other implicated ANC officials would also be incarcerated for their alleged wrongdoing.

"We will send Ramaphosa to prison for killing people of Marikana. Their spirits will never rest for as long as Ramaphosa is still at Union Buildings.

"Ramaphosa has taken a wrong turn; he is lost, he is at the wrong place. He's supposed to be in Sun City prison, that's where he belongs," the red berets leader said.

Malema said officials fingered in the failed Alexandra Renewal Project (ARP), which had an allocated budget of R1.6bn, will face the music.

The project was billed as a joint urban regeneration project involving local, provincial and national government.

A number of investigations are under way, including by the auditor-general and public protector's office, into what happened to the money that was set aside by the provincial and national government for the project.

Malema claimed that the ANC government had stolen the money allocated in 2001 to improve the physical, social and economic environment of the township.

Residents of Alexandra took to the streets last month under the banner #AlexTotalShutdown protests where they aired their frustrations with the snail's pace of service delivery in the township, escalating crime and a housing backlog.

ANC poll estimates party will get 56% of votes in Gauteng

The ANC in Gauteng has renewed confidence after its own internal polls revealed the party was likely to get more than 50% of the votes in the ...
News
2 years ago

ANC deputy president David Mabuza has called for members of the party's national executive committee to stop airing their dirty linen in public but ...
News
2 years ago
Next Article