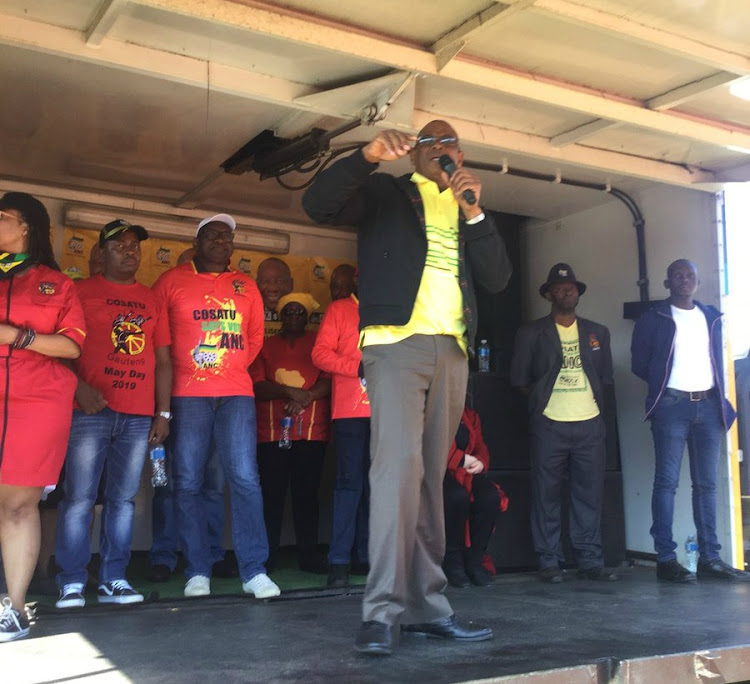 Speaking at a Workers' Day rally in Ekurhuleni on Wednesday, ANC secretary-general Ace Magashule said all governments run by the ANC must end outsourcing.
Image: Sadtu via Twitter

ANC secretary-general Ace Magashule has called on all governments run by the ruling party to end outsourcing of workers.

Addressing a Workers' Day rally in Ekurhuleni on Wednesday, Magashule said workers should not have to march for such a demand.

He said the ANC was not a federal organisation and as such, if its government was insourcing cleaners in Gauteng, other provinces and municipalities should do the same.

Magashule said the party should ensure that it lives up to the promises it makes to workers in the run-up to elections.

His call came after Gauteng premier David Makhura told the small crowd that his office had insourced 300 employees at his office.

Makhura said his government would further insource more employees who do jobs like cleaning.

He urged workers to vote for the ANC because should the party be replaced by the DA, he claimed they will be the biggest losers.

He said the reason opposition parties and Amcu were attacking the National Union of Mineworkers (NUM) was because they were fighting the ANC.

Ntshalintshali attributed the fight to the fact that NUM had seen three of its former secretaries - Cyril Ramaphosa, Kgalema Motlhante and Gwede Mantashe - ascending to be secretary-generals of the ANC.