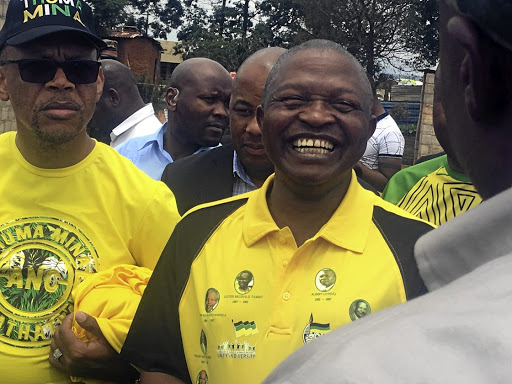 ANC deputy president David Mabuza has called for members of the party's national executive committee to stop airing their dirty linen in public but sit down and talk.

Mabuza who was speaking during the May Day celebration in Mbombela on Wednesday also said he would not allow “wolves” to use his name to recall President Cyril Ramaphosa because that will be killing the ANC.

“I would like to assure you that the ANC will stay united for our alliance to work better.

"Those who are seeking to divide the ANC will never succeed… As for me, I don’t have an ambition to push the president, I will defend the president of the ANC, it’s a necessary thing to do. I will not allow wolves to eat the president that will mean the alliance and the ANC have been eaten,” said Mabuza.

His comments followed speculation that there was a faction in the ANC that wants to replace Ramaphosa after next week's polls.

Three disgruntled ANC members in the Free State will find out on Wednesday if their attempt to declare the ANC provincial list conference unlawful is ...
News
3 years ago

“So there’s no amount of persuasion that can divide the national executive committee. So members of the NEC must stop talking about their frustration, anger… If there are issues let us sit down and talk in our boardroom and not go around dividing the ANC,” said Mabuza.

First deputy president of Cosatu, Mike Shingange told the workers that they are calling finance minister Tito Mboweni to “order” for saying the government’s wage bill is too high.

“We are saying order minister Mboweni for lying saying the government wage bill is too high and target employees to take pension at a younger age. If he say there are people who are old it must start by himself because he’s about sixty years.

The ANC's integrity commission (IC) - which was mandated by the governing party's highest decision-making body to review its lists of candidates for ...
News
3 years ago

According to statistics for the past five years government employees have dropped that they were and if he say people must be cut off we must talk about them as ministers, directors and CEO of the government entities who are all eating from the public purse, why target our workers in laser ranks,” Said Shingange.

He further applauded people of South Africa for showing the biggest boycot of the E-tolls.

“This is be longest boycott and the biggest in the democratic government and you have done well, Sanral saw that you are not paying and decided to cut off the debt but the very same minister reversed it, no. I think we must talk about the recycling of our people in government. We have more capable fresh minds we can use within the ANC who can do better,” Said Shingange.