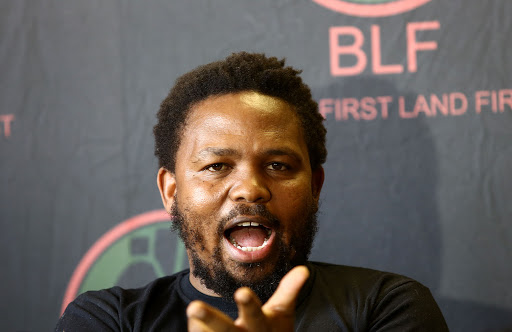 The Freedom Front Plus has headed to the Electoral Court to have the Black First Land First deregistered as a political party.
Image: Masi Losi

The Freedom Front Plus (FF+) has approached the Electoral Court to have Black First Land First (BLF) deregistered as a political party.

The party withdrew its first legal attempt against the BLF and instead appealed to the Independent Electoral Commission [IEC] to reverse a decision of its chief electoral officer to register the party. The IEC dismissed their appeal.

On Tuesday, party leaders explained that their decision to withdraw the case the first time around was on procedural grounds. They had to exhaust all process available in the law before going to the Electoral Court, the party said.

The FF Plus is arguing that the chief electoral officer violated the law by registering the BLF as a political party. This is because in its constitution, the BLF states that their membership is only open to black people.

The FF Plus argues this goes against section 16(1)(c) of the Electoral Commission Act, which states that the IEC may not register a political party that does not allow membership of the party based on race, colour or ethnicity.

The party also accuses the IEC of failing to gazette the registration of the BLF, thereby denying the public and others who would have objected to the registration an opportunity to register their objections.

“The IEC is not willing to admit that it made a mistake by allowing the BLF to register as a political party and thus the FF Plus will ask the Electoral Court to instruct the IEC to correct this mistake,” said party leader Pieter Groenewald on Tuesday.

“The FF Plus believes that the majority of South Africa's problems are caused by the sheer disregard for legislation. It is therefore important for the party to proceed with the matter, seeing as the IEC cannot be allowed to violate legislation. It threatens South Africa's democracy and the upholding of law and order,” he said.

FF Plus MP Corne Mulder said while they understood that ballot papers were already being printed that included the BLF, the code of conduct provided “that if a political party contravenes the code, the IEC can take a decision not to count that specific party's votes”.

“We say that it is possible to ensure the BLF - even if their name is already on the ballot - that their votes cannot be counted. That is what we are asking the Electoral Court, to ensure that they do not participate in the elections and are deregistered as a political party,” he said.

Mulder claimed that the IEC had also made the point that deregistering the BLF would make it difficult for them to guarantee a peaceful election. "That is a very disingenuous argument. Whether the party behaves or not should not be the reason you abide by the law or not. It doesn't makes sense at all," he said.

Another FF Plus MP, Wouter Wessels, said the IEC did not consider the merits of his party's appeal and dismissed it on the basis that the time period to object had passed.

“Our argument is that that 30 days [to object] never started because it was never gazetted. They didn't hold our appeal on the basis of the time frame - and then also on convenience, which is that the election is imminent,” he said.

The IEC said it was not in a position to respond to questions because the matter was before a court and therefore sub judice.