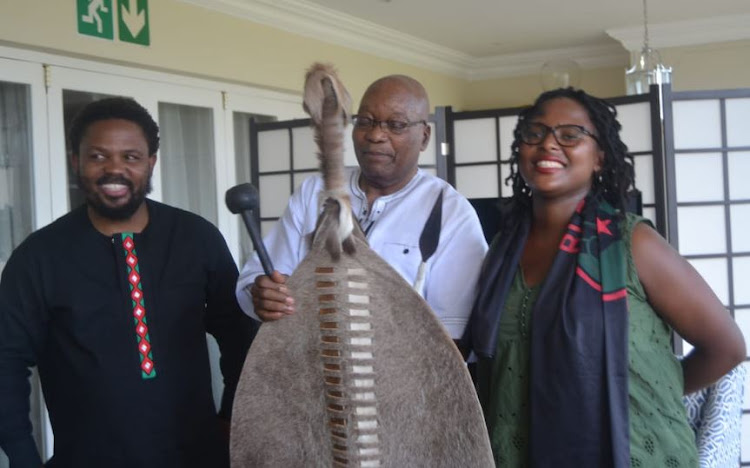 ANC ha e fair mara, waitsi. Last year they refused Baba's generous offer to take Thuma Mina on an African safari to introduce him to heads of state before giving him the keys to the Union Buildings.

Now they have stolen Nkandla's famous son's thunder again, sending Thuma Mina all by himself to go do Zulu dancing at Moses Mabhida Stadium in front of an audience that is widely thought of as 100% Zuma. By doing so, Luthuli House seems to be sending a message that they no longer need Baba to win the Maskandi vote.

No wonder Baba seemed to be in a foul mood and spoiling for a fight, any fight, on Sunday.

It all started with him posting pictures of himself floating in a fire-pool. The pictures were accompanied by a line straight from boxing great Muhammed Ali's fighting talk: "Float like a butterfly, sting like a bee." He was floating alright, but who was he preparing to sting?

Well, it didn't take long for the answer to come. Suddenly pictures emerged of Msholozi surrounded by his new BFFs, in the form of Andile Mngxitama and his BLF crew, doing the Black Power salute.

Was the old man sending a message to Luthuli House that even if they ignore him and refuse to have him guide Thuma Mina's campaign trail in KZN, there are still good souls like those chaps from BLF who still remember how good the Gupta curry was at Saxonwold Shebeen.

The whole affair left Vera wondering: If the Pipe-Smoking One was dubbed "the Dalai Lama" of COPE by those in the ANC who believed that the former president was the spiritual leader of the breakaway party formed by Mbazima Shilowa and Mosiuoa Lekota, does that mean Msholozi can be called the BLF's Guru?

Speaking of COPE, Vera was amused to see a statement from the party calling on the president, his ministers and their deputies to start paying for petrol "from their pockets" so that they could feel the pain suffered by the public whenever the price of fuel goes up.

Given that Lekota was in government and the state - in various roles - for 14 years, is he speaking from personal experience, perhaps?

Political sangomas like telling us that if the ANC wins the next two elections, we are likely to have DD "The Cat" Mabuza as our next president. But Vera thinks the sangomas are making a big mistake by ignoring one Samson Gwede Mantashe.

Mqwathi has shown an amazing ability to succeed in holding every major position Thuma Mina has held in the past without many realising that he is quietly walking in the Billionaire President's footsteps.

He first became the National Union of Mineworkers general secretary, a position held by McBuffalo in the late 1980s. Then he became ANC secretary-general, a post McBuffalo occupied in the 1990s and it would not be a surprise if he emerges as ANC deputy president at its next conference, a position McBuffalo held before becoming president.

For journalists - especially a particular one at eNCA - Vera suspects a Mantashe or Mabuza presidency would still be far better than Jessie Duarte at the Union Buildings.

A Mantashe presidency, it would appear from his conduct, would not mean a better life for workers. This former unionist and ex-chairman of the SACP is accused of firing some employees at his farm in the Eastern Cape because they allowed investigators to inspect his property for Bosasa security installations without his say so. Is this the behavior Marxists refer to when they say a leader has committed "class suicide"?