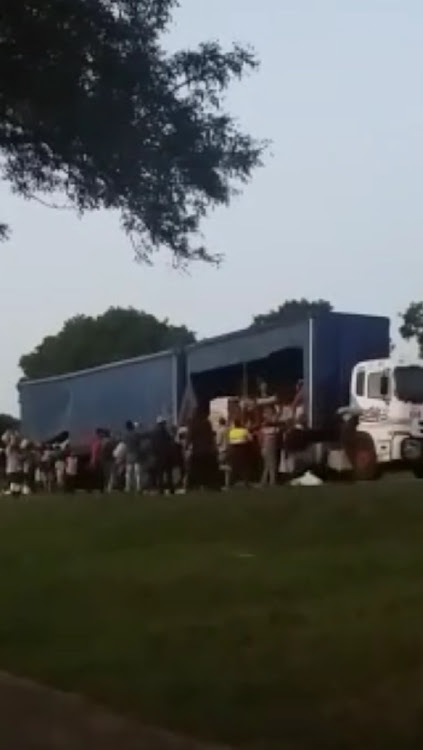 Trucks transporting goods from the Durban harbour were prevented from operating after a route they were travelling on was blockaded by protesters.
Image: IPSS Medical Rescue

Truck drivers operating in the vicinity of the Durban port were caught in a blockade by a group of protesters on Monday.

"They were allegedly cutting the wires from the trucks‚ forcing them to be immobile.

"A case of malicious damage to property was opened at the Maydon Wharf police station."

Zwane said no arrests had been made and the road had been cleared.

Two men suspected to be the masterminds behind a spate of bread delivery truck robberies in Soweto, Johannesburg, have been arrested.
News
3 years ago

It is not clear what sparked the blockade.

However‚ a community crime-watch group claimed on social media platforms that the blockade was related to foreign drivers.

On Sunday‚ traffic on the N3 highway between Pietermaritzburg and Durban came to a standstill following a blockade by aggrieved truckers.

It is understood that the blockade‚ which affected traffic in the Cliffdale area‚ was related to poor working conditions and the employment of foreigners by local trucking companies.

Transport minister Blade Nzimande called for the arrest of protesting truckers and the impounding of their vehicles.

Looters ransack truck after crash on R81 in Limpopo

The R81 in Limpopo was temporarily closed at Sekgopo village on Friday after an accident between a bus and a truck carrying crates of bottles.
News
3 years ago

"The department of labour was tasked to conduct unannounced inspections to unscrupulous employers disregarding employment laws and the law-enforcement officers were tasked to identify routes with high volumes‚ particularly routes used by cross-border trucks‚ so that they can conduct multi-disciplinary roadblock operations‚" said Nzimande.