Alcohol may be to blame for N4 crash 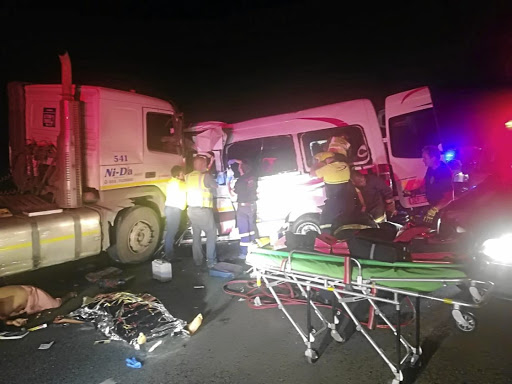 Medical personnel attend to the accident scene that claimed 15 lives on the N4 between Malelane and Mbombela on Friday. A head-on collision claimed the lives of six people on the N1 in Modimolle.
Image: Mandla Khoza

Mpumalanga MEC for community safety, security and liaison Pat Ngomane has blamed alcohol and reckless driving as the cause of the horrific accident that led to the deaths of 15 people on Friday.

Fourteen people were killed on the scene while one died in hospital on Saturday after the crash that involved two trucks, a minibus taxi and a VW polo.

The accident took place on the N4 between Malelane and Mbombela near Matsulu township.

Ngomane said the driver of the Polo had drank alcohol and it was still in the car after the accident.

"We have arrested the driver of the VW polo and taken his blood samples to find out how much alcohol he had consumed prior to the accident," said Ngomane.

Ten people were injured during the accident and those who died were all from the taxi, including its driver.

The deceased, who were all from Mbombela, were heading to Nkomazi (Malelane).

Ngomane said the funeral arrangements for the deceased will be discussed during the course of the week.

"For now we have had 14 families identifying their loved ones and we are waiting for the one body to be claimed," said Ngomane.

Meanwhile, the 26 people who died when a truck, a bakkie, a minibus and SUV collided on the N1 outside Modimolle have all been buried after a mass funeral service in Senwabarwana.

In addition to the thousands who filled Senwabarwana's Ben Seraki Stadium, distraught family members as well as various dignitaries such as the province's premier Stan Mathabatha and MEC for transport Makoma Makhurupetje, were present at the mass funeral.

It emerged this week that 18 of the deceased were from around the Blouberg local municipality, while three were from other districts.

Six more people died on the N1 in Modimolle when two cars got involved in a head-on collision at the weekend.

The crash happened on the N1 highway that links Limpopo to Gauteng. It is one of the main routes in the country's road networ
Opinion
3 years ago
Next Article