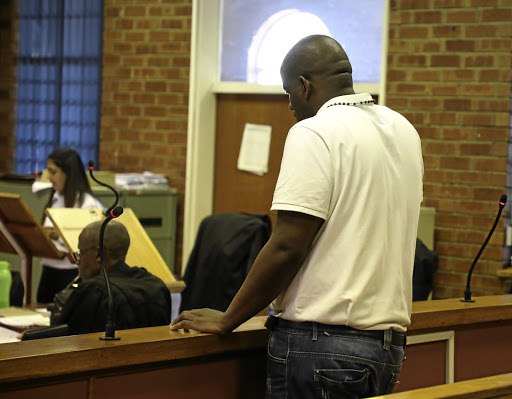 A man accused of multiple rapes stands in the dock at the Protea magistrate's court in Soweto yesterday. He fingered a rosary while his alleged victim testified. /THULANI MBELE

A Soweto man allegedly prowled the streets of the township in his car offering young attractive women lifts in the evenings - before allegedly robbing and raping them - some at gunpoint.

The 28-year-old is on trial in the Protea magistrate's court after he was allegedly linked to three rapes through his DNA.

Prosecutors believe he may still be connected to other rape cases in the area, and the province at large.

Yesterday, one of the alleged victims testified that the accused gave her a lift when she was waiting for a taxi in Pimville on her way to an evening church service in 2017.

She said a VW Golf pulled in front of her and the accused offered her a lift after asking her where she was going. She said he offered to even drop her off at church in Chiawelo.

"He was very friendly, he said he was going to the same area I was headed to. He then drove with me and made small funny conversations," she told court.

She said she was so unsuspecting and she kept texting on her phone and only realised later that the man had changed the route.

"When I asked him why he had changed the route, he said he was taking a short cut to my church," she said.

She later noticed that they were headed to a secluded area, which had a row of already closed shops where he stopped and demanded that she take off her clothes.

"When I refused, he punched me on the eye and sat on top of me and undressed me," she recalled.

She said the man forcefully pulled down her pants and while tightly holding her hands together and then raped her.

"He then got off me and stepped outside the car to dress up. My handbag was at the back seat, when I tried to reach for it, he bit my hand and took all the money I had."

She said the accused left her there and drove away.

The woman broke down as she recalled her ordeal.

'It was not the worst kind of rape': HIV+ man appeals life sentence

It was "not the worst kind of rape" because his victim didn't contract HIV, says man trying to overturn his conviction.
News
3 years ago

SA needs to create a culture where boys are taught to respect girls’ bodies in order to help reduce rape culture.
Opinion
3 years ago

When she was overcome by emotion and could not stop crying, magistrate Audrey Mpofu stopped proceedings and postponed her testimony to May 5.

The accused came to court, spotting a well-groomed goatee, wearing a crystal white golf T-shirt and denim pants. He also had a rosary hanging on his chest, with his hand tightly clinging onto the cross as his victim testified.

Prosecutor Sadiyya Muller told the court that the accused used the same modus operandi on his victims, who were all alone in the evening.

Muller said the man targeted female commuters who used public transport in the evenings, when there were fewer transport options for them.

Outside court, the victim, a mother of two, told Sowetan her life had never been the same ever since.

"I see his face every time I close my eyes and I battle to focus at work because I am not myself anymore."

The man was arrested in October, after one of his alleged victims noticed him parking outside the University of Johannesburg's Soweto campus.

The first victim was raped in in September, also in an open space, in Klipspruit, Soweto, after she was given a lift, while on her way home from work.