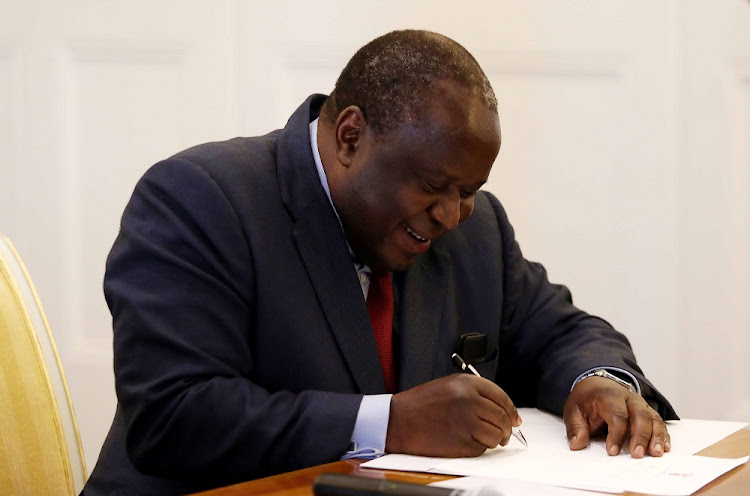 "On Eskom, there is no change as far as we are concerned. All we want to hear is how he plans to turn around the SOEs (state-owned enterprises) in general because these unbundlings are not worth it - if they were, people would be more transparent and coherent on what they are trying to achieve," said Cosatu spokesperson Sizwe Pamla.

Pamla said Mboweni should give a detailed plan on how he intends to avoid the country being subjected to load-shedding as South Africa cannot afford to go into a technical recession.

Pamla said the meeting did not yield any positive results over the proposed unbundling of Eskom and Cosatu will therefore decide on what steps to take at the federation's central executive committee (CEC) meeting on Tuesday.

"Nothing was resolved in the meeting, we had more questions. The answers we got didn’t convince us to change our  view [that] we had when we went into the meeting. We came out still feeling that things aren’t clear," said Pamla.

During  his State of the Nation Address, President Cyril Ramaphosa announced earlier in February that the parastatal would be split into three entities - transmission, generation, and distribution.

Meanwhile, Saftu said it didn't expect Mboweni to give a clear direction on how to deal with the issues facing the country.

"He [Mboweni] will deliver more of his predecessors’ catastrophic neoliberal ‘business as usual’ policies which caused today’s crisis in the first place - policies dictated by the credit ratings agencies on behalf of multinational big business," said the federation's Patrick Craven.

A deadlock between Cosatu and government over the unbundling of Eskom has persisted following failed talks on Tuesday.
News
3 years ago

Craven said since the dawn of democracy, the ANC-led government has implemented an inappropriate macroeconomic policy framework that has led to economic stagnation, worsened unemployment, deepened poverty and made South Africa the worst country in the world in terms of inequality.

Saftu accused the ANC government of introducing monetary policies that led to the cutting of exchange controls, which has led to billions leaving the country's shores that was meant to build more industries.

"Government allowed our big companies to shift their listing to London and New York, again robbing our economy of resources we need," Saftu claimed.

Turning to Eskom, the federation said the state-owned enterprise's debt crisis has now coincided with the latest round of load-shedding.

Saftu said the failure of generators, including at the two new power stations at Medupi and Kusile, and the attempt to impose massive tariff increases, resulted in load-shedding.

"This has already wreaked havoc for both domestic users and manufacturing and commercial businesses," it said.

"If not rectified, this crisis will lead to an economic implosion of the entire economy, for which electricity is its life blood. Thousands more jobs will be  at risk and living standards will plummet."

Saftu said it was also not in favour of the unbundling of Eskom.

"Eskom must remain in public ownership but not run as if it had already been privatised. It has to be taken out of the hands of corrupt business representatives and run democratically by elected representatives of the workers, consumers and the state, who must be subject to recall and punished if they repeat the crimes of the former bosses," the federation said.

Mboweni's speech will take place in parliament at 2pm on Wednesday.