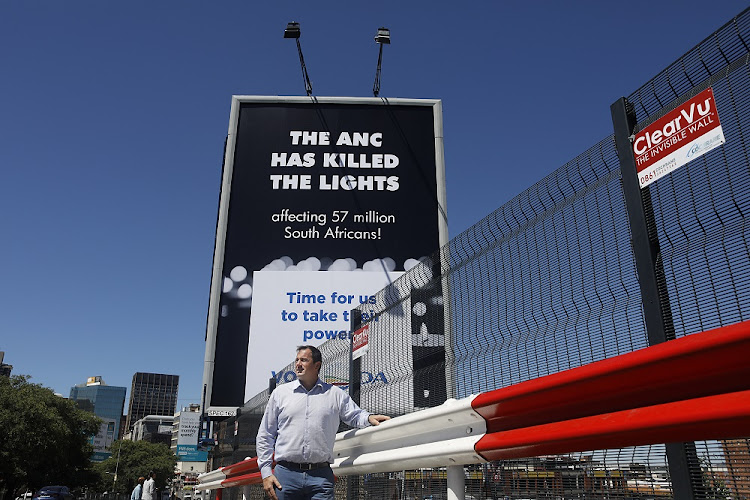 Hot on the heels of a week of load-shedding by Eskom‚ John Steenhuisen‚ MP and DA chief whip‚ on Sunday unveiled a billboard on the Queen Elizabeth Bridge in downtown Johannesburg taking aim at the ruling party's mismanagement of the electricity utility.

He said the ANC had left Eskom besieged with "corruption‚ inefficiency‚ mismanagement and debt".

"The previous management teams at Eskom have plundered the crippled state-owned entity through pre-paid coal contracts‚ nepotism‚ inflated supply contracts and exorbitant consultancy fees with the likes of Mckinsey‚ Trillian and Tegeta. Furthermore‚ Eskom executives have consistently rewarded themselves with massive bonuses and salaries. These actions have hollowed out the entity and left it in financial ruin."

Steenhuisen said President Cyril Ramaphosa's current proposal to unbundle Eskom into a holding company‚ with three separate business entities to be owned entirely by the holding company‚ would fail because each of the three entities would have the same holding board.

"Thus‚ the intention to stimulate competition in the generation sector of Eskom will be limited by the fact that the entities are not wholly independent or competitive. They will continue to be state owned. The monopoly will continue."

Steenhuisen said the DA was proposing that Eskom be broken into two separate entities - into a generation and transmission entity.

"Our offer would see the generation entity privatised in an effort to break Eskom’s monopoly‚ allowing independent power producers to compete on an equal footing in the generation sector.

"Well-functioning metros will be able to source energy directly from independent energy suppliers.

"With the splitting off of the generation component of Eskom‚ they could look at selling off power stations to different IPPs (independent power producers) in order to settle their debts."

Asking for voter support in the May general elections‚ Steenhuisen said: "The DA plan would amount to real change‚ not merely the addition of more board members."