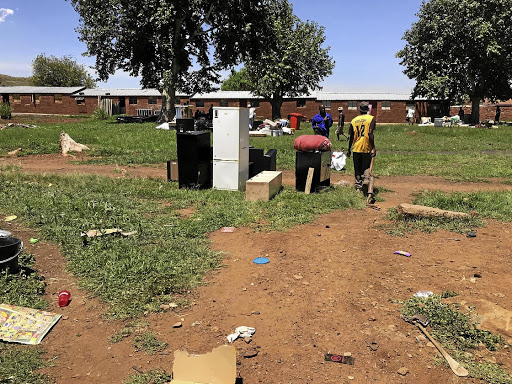 Angry Mamelodi West residents yesterday forcefully evicted people who illegally occupied recently built low-cost housing units in the township, alleging that their presence was responsible for a spike in crime in the area.

The units, across the street from the old Mamelodi Hostel, were cleared yesterday, some in the absence of their occupants who had gone to work. Police watched as doors were broken down and people's items removed. The eviction was sparked by the death of 20-year-old Branden Mahlangu who was gunned down at an alleged unlicensed tavern in one of the units on January 11.

Hundreds of the illegal occupants were stunned when their doors were broken down and their belongings thrown out of their units while residents helped themselves to some of their valuables.

Beds, TV stands, clothes and other items were dumped in the field near the hostel.

Mahlangu's father Ronald Maseko, who was present during the eviction, told Sowetan his son was shot and killed by unknown assailants as a result of illegal occupants' presence in the township.

"Branden usually came here to play snooker with his cousin to pass time. On the day of the shooting, four guys allegedly arrived at the hostel. Three of them approached my son and shot him at close range without saying a word."

Maseko said the assailants jumped into their vehicle and fled the scene. "This is why people are upset. Our children are being killed here because there are a lot of taverns that are not licensed. Police don't seem to be doing anything about the situation here."

Resident Tshepo Lekalakala said it was unfair to have people occupying the hostel units without proper allocation taking place. "These people came here from wherever they came from and settled in these units while we didn't benefit from them," Lekalakala said.

He said residents engaged the City of Tshwane about the allocation, to which the municipality apparently said it allocated 70% of the units to people living in the area while the remainder would be given to outsiders.

"The municipality knows about this problem and they (officials) said they would address it by allocating the units to residents of Mamelodi. Now these units have been taken by people we don't know who are now bringing crime to our area."

Disebo Modulela, one of the hundreds of people evicted, acknowledged that they illegally occupied the units, but disputed their presence brought about criminal activity.

"Right now they are busy looting and taking our things. I run a tuck shop and they took my stock and around R10,000 in cash. How are we the ones responsible for crime when they are stealing from us."

Police Capt Sam Shibambo confirmed that a case of murder was being investigated but no arrests had been made.

Tshwane metro was not available for comment at the time of going to print.