It's a miracle: Breech infant survives delicate birth in a van 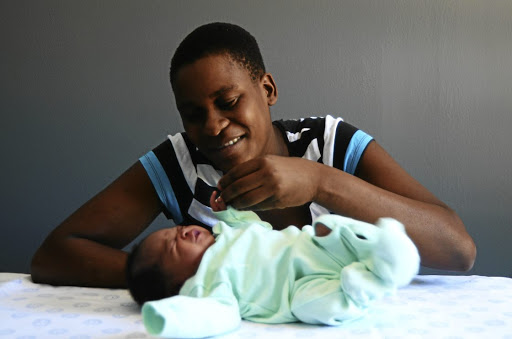 Sibusisiwe Sibanda gave birth naturally to a breech baby at the back of a bakkie in Diepsloot last week.
Image: Mduduzi Ndzingi

The delivery of a breech baby at the back of a bakkie has been described as a "miracle".

A breech birth is when a baby is born buttocks or feet first and is considered high risk.

It can result in numerous complications including the baby suffocating or suffering from brain damage.

But Khathutshelo Sibanda was born healthy five days ago at the premises of OR Tambo Clinic in Diepsloot, north of Johannesburg, despite being nowhere near a surgical theatre.

Her mother Sibusisiwe Sibanda, 28, gave birth at the back of a bakkie.

Yesterday, Sibanda from Diepsloot held her bundle of joy while relaying the drama that unfolded.

She said she started feeling labour pains in the wee hour of Thursday and started to panic because she did not have a phone to call an ambulance.

"My husband was working night shift and I did not have a phone to call for an ambulance at that time," Sibanda said..

She said the situation escalated when her waters broke not long after her husband returned from work.

"He went to look for help and managed to ask a stranger who was driving a bakkie in the area to transport me to the clinic," Sibanda told Sowetan.

" I was anxious but I'm happy that we managed to get transport to the clinic."

She said the baby's foot was protruding from her vagina by the time they arrived at the clinic's maternity unit.

"I had no idea my baby was in a breech position."

Mary Makgotlhoe from the district specialist team in the Gauteng health department was at the clinic for a meeting when someone alerted them to the situation.

Makgotlhoe said they all ran out to go and assist.

"I asked for gloves and rushed to the van. She was at the back of the bakkie which didn't have a canopy in a hot sunny day.

She said the baby's skin had turned blue in colour, which indicated that circulation was cut off.

"Seeing that only one leg was out, the worst scenario was that the cervix could have constricted the leg, causing the baby to be stuck."

Bara's new CEO much at home despite all challenges

Growing up in GaMphahlele village in Limpopo, Dr Nkele Lesia would hear people talk about the famous Chris Hani Baragwanath Academic Hospital in ...
News
3 years ago

She said Khathutshelo did not immediately cry after birth but did so about 10 minutes after being put on oxygen.

"This is really a miracle baby taking into consideration the time frame from when the mother experienced contractions and the mode of transport," she said.

Operational manager Tiny Aphane, who also helped deliver the baby, said ensuring that both mother and child were healthy was their priority.

"It's fulfilling to have delivered a healthy baby," Aphane said.

However, according to gynaecologist Dr Muponisi Chabalala, a breech baby is likely to survive a vaginal birth despite the risks involved if he or she is in the care of an experienced midwife or doctor.

Chabalala said medical practitioners can attempt to turn the baby to a headfirst position through an external cephalic version procedure and then proceed to conduct a vaginal delivery.

He said if the cephalic version failed then an elective Caesarean can be performed.