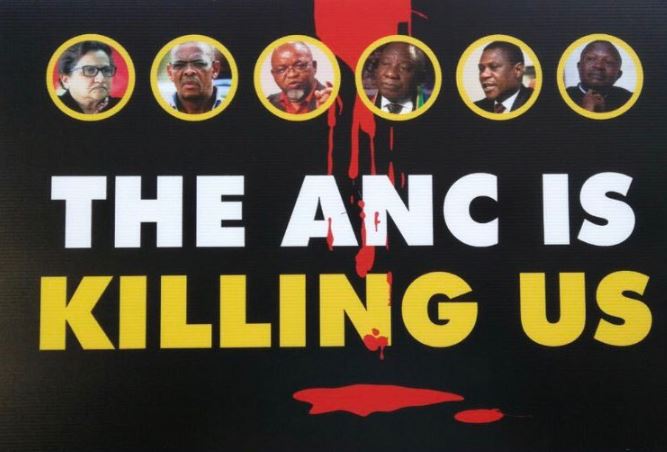 The DA's controversial campaign poster attacking the ANC has had a backlash from politicians and the public. The DA has hinted that the ANC is behind the vandalism of the poster.
Image: Twitter/ SimonPGrindrod

The DA billboard in Johannesburg listing the names of children who died after falling into pit latrines and the victims of the Marikana and Life Esidimeni tragedies was vandalised on Thursday.

The DA faced a backlash after some felt the billboard — which attacks the ANC — was "insensitive". The billboard was part of the launch of the DA's #TheANCIsKillingSA campaign in the run-up to this year's election.

DA leader Mmusi Maimane read out the names of victims on Wednesday at the launch.

In response, the ANC said the DA was jealous of the liberation party’s changing fortunes, which indicated positive sentiment about the party heading into the general election in May. The ruling party also accused the DA of spreading lies, claiming the party  contravened the IEC electoral code and that it would take legal action.

Johannesburg mayor Herman Mashaba hinted that ANC members might be behind the damage.

DA spokesperson Solly Malatsi said vandalising the billboard was "tarnishing the memory of those who died under an ANC government".

"This act of destruction is an insult to the memories of the people who died during the avoidable Esidimeni tragedy, Marikana murders and pit toilet deaths," Malatsi said.

"The vandalism of this billboard cannot hide the fact that the ANC is directly responsible for the deaths of countless South Africans due to their callous negligence."

Is there anything that the ANC does not want society to know? ⁦@Our_DA⁩ pic.twitter.com/GgNahEhuyT

No sensitivity at all. No permission was sought from the families . It’s an act of desperation . It’s worse when one considers that the majority members of the DA were voting for NP some years ago. We don’t need to remind people of what NP did to the blacks in this country.

The Esidimeni Family Committee is angered by the DA billboard using the names of their late family members, they will be taking legal action against the DA for what they termed a marketing gimmick that is offensive, in bad taste and very hurtful. pic.twitter.com/gg67vZ0h8M

Well done to a family member of the #LifeEsidimeni victims for swiftly doing the right thing, whilst the DA is still justifying its terrible indiscrection. It has failed to respect the wishes of the victims families

What was @MmusiMaimane thinking? Did he think at all? How do you put the names of deceased people on a political billboard w/o family consent? Is this guy Really a black South African mara? https://t.co/eb8Im0pvDG

This was always going to end badly. It was out of touch, opportunistic and uncaring.

The DA should simply state what it stands for and not against. Had they actually done something to change this community instead of exploiting it, things night have turned out differently. https://t.co/q838uzsSmQ