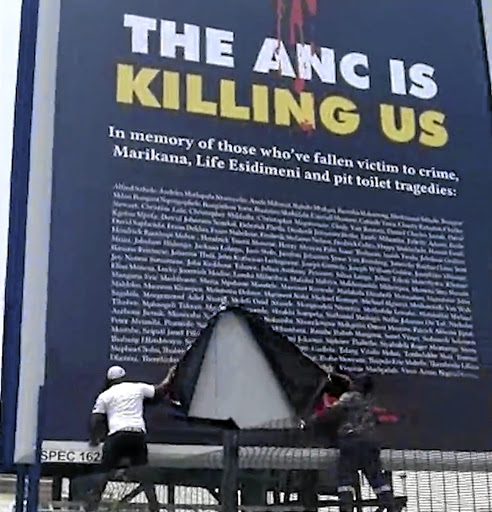 AMCU has says the DA billboard is insensitive.

That is what the Association of Mineworkers and Construction Union (Amcu) said after the DA unveiled a billboard listing the victims of the Marikana massacre in Johannesburg on Wednesday.

Amcu said the DA was using a "sensitive matter" to score political points in an election year.

"Amcu is extremely disappointed with the DA and its leader‚ Mmusi Maimane‚ for utilising a painful part of history as part of their election campaign.  We view it as highly opportunistic and totally out of order."

The DA has defended its controversial billboard in Johannesburg after it was vandalised yesterday.
News
3 years ago

The union blamed the government’s delay in paying reparations to the families of victims "for opening the gap to allow in narrow political point-scoring".

"If only government could have speedily and openly taken ownership of their wrongdoing‚ it would have brought healing to the victims‚ while also bringing closure to the nation."

Amcu said it supported freedom of expression‚ but "not at the expense of the victims whose wounds are still raw. The victims have not had closure after this massacre‚ and therefore their feelings and rights must be respected."

The billboard‚ which also lists the names of children who died after falling into pit latrines and the victims of the Life Esidimeni tragedy‚ was vandalised on Thursday.

The billboard was part of the launch of the DA’s #TheANCIsKillingSA campaign in the run-up to the national elections.