Mamelodi commuters elated A Re Yeng is back 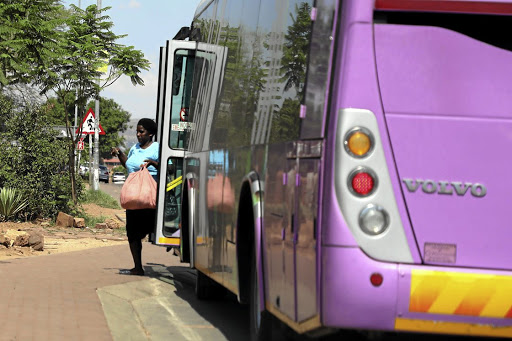 The A Re Yeng bus service resumed operations in Mamelodi this week after being suspended following a dispute over bus fares with local taxi associations.
Image: Thulani Mbele

A decision is yet to be made on the adjustment of the Tshwane Rapid Transit (TRT) bus fares in Mamelodi, after the A Re Yeng bus service was suspended in the area for more than two weeks.

The suspension was due to disagreements between the management of the TRT and the taxi industry.

Yesterday, the TRT management said buses were back on the road following negotiations with taxi associations in the area, bringing to an end the frustration suffered by commuters who rely on the bus service.

TRT CEO Sam Matebane said no agreement had been reached regarding the adjustment of bus fares as requested by the taxi industry.

A Re Yeng not going anywhere near Mamelodi

"We are still in negotiations and have been provided with police escorts in the meantime," Matebane said, adding that the management had even shared financial records with the taxi associations.

The Mamelodi Transport Solutions (Mantrans), which represents taxi associations in the area, had apparently sent a letter to the TRT on November 22 requesting to have representation in the TRT board and to benefit from the bus service's revenue.

The co-ordinator of Mantrans, Bonny Ndjishe, also confirmed that negotiations over bus fares were ongoing.

Ndjishe said the TRT had shared their financial records with them long before the bus service was suspended, adding that this was part of a process to guide the taxi associations in a process to win a bus service contract in Mamelodi.

"The buses started operating yesterday [Tuesday]. We have nothing against [the] TRT as the taxi industry in Mamelodi. We are very happy that people will have access to reliable transport," said Ndjishe.

Yesterday, A Re Yeng buses could be seen dropping off commuters in the township.

Maggie Nyoni, who had just got off the bus, said she was relived the bus service had resumed operation, noting that she preferred buses because they were reliable and cheap.

Lindelwa Madolo, whose son uses buses to get to school, also expressed relief that the the bus service was back.

"When the buses stopped operating just before the school holidays we struggled," Madolo said, adding that they hoped the buses would continue to run smoothly when schools reopen.