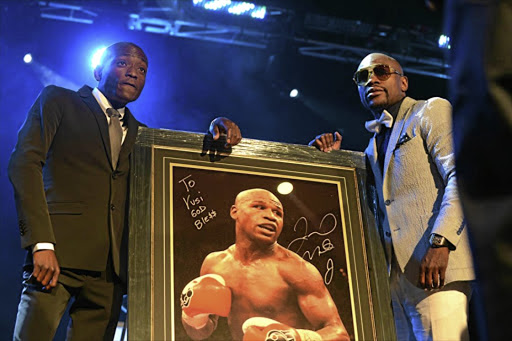 Vusi Mathibela, left, with boxer Floyd Mayweather at a gala dinner in 2014. Now the nightclub owner is allegedly linked to the murder of Wandile Bozwana.
Image: Supplied

The name Vusi "Khekhe" Mathibela strikes fear in the hearts of many taxi operators and business people in Mamelodi, Tshwane.

The 32-year-old taxi boss is accused of running an extortion ring in the township east of Pretoria which forces local entrepreneurs to pay him a "protection fee".

Although Mathibela strongly denies the claim, local business people who spoke to Sowetan this week painted a picture of a modern-day Al Capone whose sidekicks move around the collecting money from them.

Among his alleged victims are taxi owners who apparently have to pay him R200 a week, per minibus.

Spaza shop owners are said to be paying R500 a month.

One taxi operator, who asked not to be named, said Mathibela and "dozens" of his lieutenants "collect money from any and every one in Mamelodi who makes money".

This week, locals claimed that Mathibela was also behind the "threats" that led to the City of Tshwane suspending its bus service in the township.

Mathibela, who owns a nightclub in Pretoria, shot into prominence when he was among four men charged with the murder of North West businessman Wandile Bozwana.

A Mamelodi businessman fled the township after being shot for allegedly refusing to pay alleged enforcer Vusi "Khekhe" Mathibela R150 000.
News
2 years ago

He is currently on R50 000 bail on the Bozwana matter.

He apparently lives in Midrand but occasionally visits the township, sometimes in a convoy of more than 15 cars and surrounded by more than 30 bodyguards, locals say.

"When he visits, it's a big event here, the streets sometimes get closed from end to end until his big convoy of cars passes," one local said.

Sowetan spoke to a local businessman who survived an attempt on his life after refusing to pay "Vusi and his people money."

The businessman has since relocated from the township, fearing for his life, after his friend was shot dead in what he believes was a hit for refusing to pay R150,000.

Mathibela, through his spokesperson Elias Skhosana, denied all the accusations. (See sidebar).

Mathibela's accusers claim that, in the taxi industry, he collects the money through the Mamelodi Amalgamated Taxi Association.

A KwaZulu-Natal taxi boss is being sought by the Hawks in connection with assassination of businessman Wandile Bozwana. Hawks spokesman Brigadier ...
News
4 years ago

The association's spokesperson Bonny Ndjishe denied this, saying Mathibela was merely one of their members and not in charge.

"Mata is controlled by the executive, and Mata collects money for the association. These are just allegations that people are making,"
Ndjishe said.

A taxi owner who spoke on condition of anonymity confirmed having paid "protection money" to Vusi's people.

"I'm even scared to even talk about that man, he's the most dangerous person I know.

"He charges protection money from anyone including the Pakistanis and us, taxi owners," he said.

The taxi owner added: "If Vusi's people come looking for money, the best thing to do is to give them the money to avoid any trouble."

Vusi "Khekhe" Mathibela, also known as Nyawane, because he walks with a limp, grew up in Mamelodi East.

According to those who know him from way back, Mathibela dropped out of high school to become a taxi driver. He rose through the ranks and now owns more than a dozen taxis.

His late father was also a prominent taxi owner. The Mamelodi Amalgamated Taxi Association (Mata) confirmed this week that the Mathibela family still owned taxis and belonged to the association.

Mathibela, a nightclub owner, is a powerful young businessman who is already listed as a director of four companies.

Although only 32 years old, he has already resigned as director from four other companies, according to company records.

He was photographed with Floyd "Money" Mayweather during the superstar boxer's 2014 visit to SA.