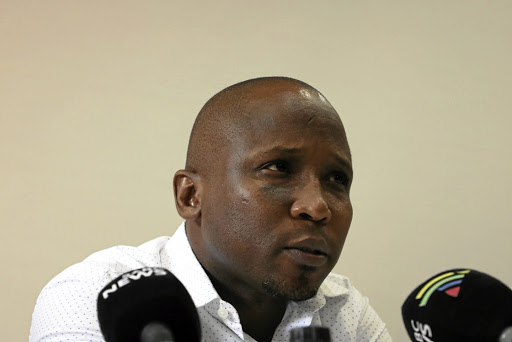 Collins Letsoalo speaks at a media briefing in Pretoria about his time at Prasa.
Image: KABELO MOKOENA

The Passenger Rail Agency of SA (Prasa) is riddled with nepotism and conflict of interest where senior employees employ their relatives and give their spouses business.

This is according to former acting CEO of Prasa Collins Letsoalo who had in December 2016 requested employees to declare business interests and disclose blood relations with other employees.

"The results were shocking to say the least; we found massive conflict of interest and what looked like the highest form of nepotism," Letsoalo said.

He said an employee who worked in his office had his wife doing business with the company. He said there were instances were people were "bused in from the Eastern Cape" to be given jobs in the organisation. "You have someone having 12 relatives working in the same department."

He was addressing a media briefing in Pretoria in which he also accused former Prasa chairperson Popo Molefe of lying under oath about his purported "350% salary hike".

Letsoalo was dismissed over the salary he was getting, even though the North Gauteng High Court ruled in April last year that he was entitled to the same package as his predecessor Lucky Montana.

At the time of Letsoalo's dismissal, Molefe said the former acting CEO should have known that he cannot get the same package as Montana who earned R5.9m.

Letsoalo said his matter was never about the salary increase.

Lives of train commuters on the line

The growing number of train collisions has heightened pressure on the rail agency over the safety of millions of commuters.
News
2 years ago

"It could have never been about that [salary increase]... why do you think the board can, without asking my side of the story, summarily dismiss me," asked Letsoalo

He only lasted under one year in the position, however, he said he had already found gross wrongdoing including massive corruption.

He said absenteeism was at 80% at the Prasa office, with one executive who had just "refused to come to work".

"I dismissed him, the board complained. He had been absent from work for more than three months without leave," he said.

Letsoalo also alleged that there was "rampant sexual harassment, some involving executives".

Letsoalo added that Prasa had numerous cases of ghost employees getting paid every month, accusing some of the board members and executives of being "more concerned about payments of suppliers".

"It was all about investigations, procurement plan, the payment of suppliers and nonpayment of others."

He added: "For example, one of the executives responsible for IT [information technology] received death threats after refusing to sign an SAP contract and make payments."

Letsoalo said this was ironically after a board member had enquired about the payments for that contract.

"Almost every board committee focused on monies, not how to cut expenses, grow revenue, ensure that trains are on time, clean or maintained," he said.

Prasa spokesperson Nana Zenani and Molefe had not responded to Sowetan's request for comment by the time of going to press.