Lives of train commuters on the line 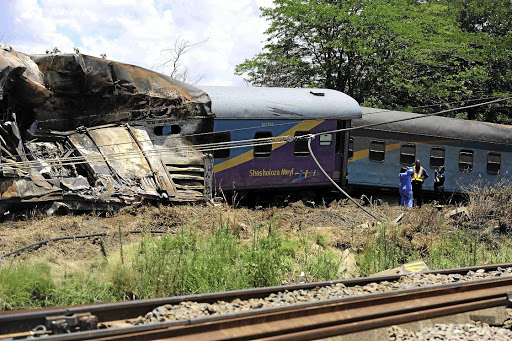 There were at least 1027 train collisions in the 2017/18 financial year, 450 train derailments and 588 people who were struck by trains, while 34 people died due to level-crossing collisions. / Thulani Mbele

The growing number of train collisions has heightened pressure on the rail agency over the safety of millions of commuters.

These are some of the revelations contained in the annual report of the Rail Safety Regulator (RSR) which was released on Friday. The report further showed that there has been 745 incidents.

It came at a time when the Passenger Rail Agency of South Africa (Prasa) is under a compliance order from the North Gauteng high court in Pretoria after RSR wanted to suspend its safety permit due to frequent violations.

RSR chief operating officer Joseph Nethathe said there were only 41 safety inspectors who have to deal with 22000km of rail line.

"There are way too few inspectors to deal with railway safety in the whole country. Our view is also that the RSR has not been given that much power to change things.

"They have been given just power to moderate and adjudicate," said Sisonke interim chairperson Paul Soto.

In January, a mainline passenger train, which is part of Prasa, hauling 18 coaches, collided with the second trailer of a truck at a level crossing about 20km from Kroonstad Station in the Free State.

The collision killed 24 people and 240 others suffered injuries.

RSR said the driver of the train was travelling above the speed limit.

"We cannot continue like this . You wake up in the morning, there is a train accident, you sleep and then there is a head-on collision [of trains] and we think we are providing a service. No, we are failing.

"When there is a head-on collision on the road we say there is surely someone who is wrong . A train accident must happen once in 10 years," said Chikunga.

Rail safety expert Willem Sprong said: "What we need to do is to look at all the reports that have been produced by the regulator and find the common denominator.

"We can't just produce reports, hand them to the minister and nothing happens."