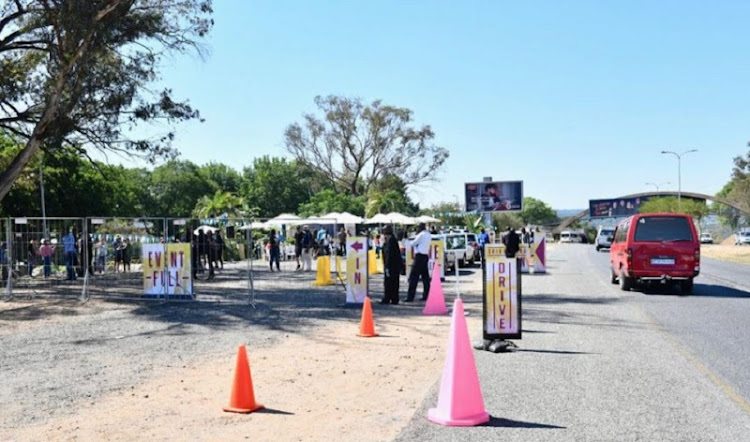 The One On Nicol bar‚ designed to look like a drive-through pub on William Nicol Drive‚ in the north of Johannesburg‚ got residents so worked up during its construction that this publication has learned members of the police were preparing a raid on the premises.

“I’ve had to tell members to stand down. I also know a group of around 20 demonstrators were preparing to protest at the site. They’re [law enforcement] busy enough‚ without chasing after what’s effectively a hoax‚” a well-placed source said.

The drinks served to motorists were just fruit juice.

The bar was the idea of the Association for Alcohol Responsibility and Education (Aware) in partnership with the Road Traffic Management Corporation (RTMC).

Aware CEO Ingrid Louw said the bar allowed South Africans the opportunity to take a look at themselves and reflect on why they were so outraged‚ yet many of them still drank before a drive or walk home.

Metro police chief David Tembe said he almost had a heart attack when he first saw the adverts for the bar.

“I called all my media contacts and said‚ ‘Meet me there‚ there’s going to be a big fight‚ we’re closing down the bar’‚” he said.

Louw explained: “After 20 years of campaigns and initiatives aimed at changing South Africans’ drinking behaviour‚ especially during the festive season‚ very little has changed. We continue to see irresponsible drinking and driving or walking being perpetuated‚ with little to no regard for consequence.”

Almost half, about 49.3% of the 9962 complaints received by the Ombudsman's office, were for motor vehicle claims.
Business
3 years ago

The campaign officially launched on Wednesday afternoon‚ but by Tuesday evening social media was buzzing with different opinions about the bar.

One resident went onto social media‚ inviting his friends for a drink.

“It’s right near my house‚ you can park here and we can go for a bit‚” he said.

Arrive Alive even took to Twitter to express their outrage. “Nobody should Drink and Drive - it is that simple!! We are aware in tweets of a ‘Drive Through Bar’ - and disappointed in messaging that the Driver can ‘have one for the road! :( We will not share further messages that could add to the marketing of such a place! #dontdrinkanddrive.”

Arrive Alive’s Johan Jonck said on Wednesday they were pleased to learn that the bar was a ruse.

Nobody should Drink and Drive - it is that simple!! We are aware in tweets of a "Drive Through Bar" - and disappointed n messaging that the Driver can "have one for the road! :( We will not share further messages that could add to the marketing of such a place! #dontdrinkanddrive pic.twitter.com/2dIfgae5g7

“It’s a clever campaign and we are glad to see the huge outcry on social media at the thought of a roadside bar. It’s very positive because lots of South African road users have lost loved ones on our roads. We always say‚ it doesn’t matter how many drinks you have‚ if you drink‚ don’t drive.”

Louw said: “We are seeing a mix bag of reactions when it comes to the One-on-Nicol Drink Thru. Some people are excited about the idea‚ while others are against it. And this is exactly what we aimed to do – create awareness and get South Africans talking about this very serious issue.”

According to Louw‚ 60% of road traffic fatalities in SA are alcohol-related. She said Aware wasn’t sure the campaign would work.

“We need to bring South Africans into a conversation‚ one that educates them and empowers them to pause and reconsider our socially acceptable drinking patterns and practices and associated behaviours. Then‚ make the right choices‚ so that ultimately‚ we move to a more responsible drinking culture in our country.”

Justice Project South Africa (JPSA) chairperson Howard Dembovsky said: “It was a great idea to raise awareness and I am very encouraged to see that social change is coming about in SA‚ with all of the outrage on Twitter.”