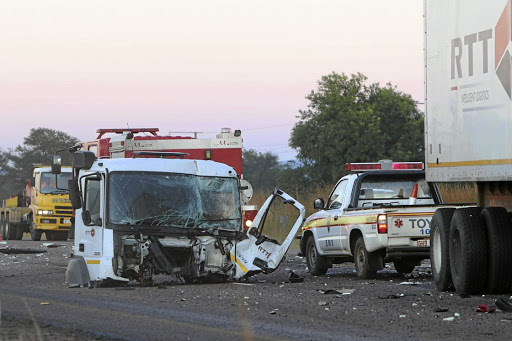 Two trucks collide head-on on the N1 road between Mokopane and Mookgophong. This stretch of road saw 40 people die on it in a space of two months. / ANTONIO MUCHAVE

The N1 route which runs through four provinces is the most dangerous road in SA, with 92 people having lost their lives on it last year.

This is according to the Road Traffic Management Corporation (RTMC).

The infamous road which runs from Cape Town, through Bloemfontein, Johannesburg, Pretoria, Polokwane and Beit Bridge near the border with Zimbabwe, had 161 deaths by the end of the past festive season, with more than half of the deaths (84) occurring in Limpopo.

In October, 26 people died in a pile up on the N1 between Gauteng and Limpopo.

This brought the number of people dying to 40 within two months on the same stretch between Mookgophong and Modimolle.

The N2, which runs through Cape Town, East London, Durban, and Ermelo, has accounted for 86 deaths in the last festive season.

The N3 has so far recorded 46 deaths, the R61 in the Eastern Cape near Queenstown 35 deaths, and the N4 34 fatalities.

The N14 accounted for 32 deaths, the N12 recorded 17 deaths and the R34 in the Free State between Heilbron and Frankfort has seen 12.

The N1 near Polokwane in Limpopo became a hive of activity yesterday when members of the Economic Freedom Fighters blockaded the road as they wanted ...
News
3 years ago

Johannesburg, Durban and Cape Town are the municipalities with the highest road fatalities.

"SAPS will also be deploying their members and leave for traffic officers has been cancelled for the festive season," Zwane said.

He said a high visibility of officers on the roads would be important to ensure that the law was enforced.

Zwane said the roads that have seen the most crashes and fatalities would be receiving priority.

"There will be intensified drunk-driving operations in the identified areas particularly around the Reconciliation Day long weekend, Christmas and New Year's Day weekends.

"Speeding as well as reckless and negligent driving will be strictly monitored during peak travelling periods," he said.