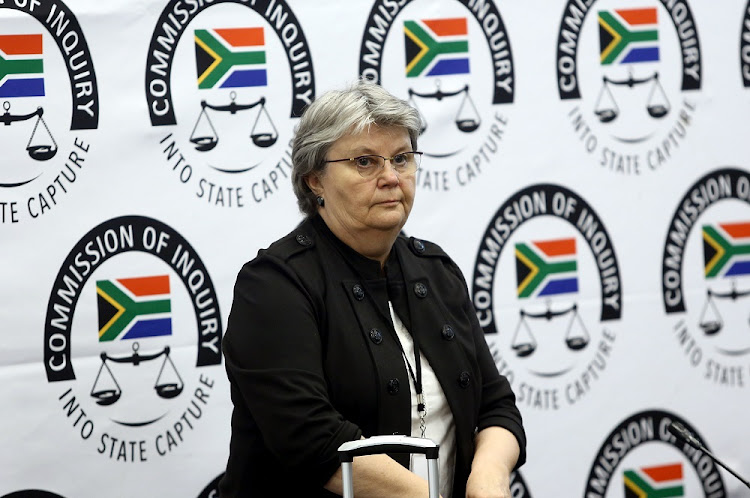 Former public enterprises minister Barbara Hogan at the state capture inquiry where she was giving evidence for the second day.
Image: Masi Losi

Former president Jacob Zuma instructed her that a process to replace then Eskom boss Jacob Maroga must grind to a halt‚ former public enterprises minister Barbara Hogan said on Tuesday.

Hogan‚ who served as minister in 2009 when Maroga was CEO at the parastatal‚ was testifying before the state capture commission of inquiry.

Hogan said she had a four-and-a-half-hour meeting with Maroga on November 4 that year‚ during which Maroga was insistent that she intervene in a dispute between himself and Eskom’s board.

Maroga‚ whose contract was due to expire in 2012‚ accused the board of conspiring to illegally fire him under the veil of voluntary resignation.

Hogan said the next day the Eskom board informed senior management that Maroga was no longer CEO.

Zuma was not in the country at the time. However‚ Hogan said: "I got a telephone call from the president and he was really furious and he was shouting at me."

Speaking of the conversation with Zuma‚ she said: "He said 'Maroga‚ you've got to stop it.' He said tell them (the Eskom board) that they have got to stop now ... And short of just defying him‚ it was a very confusing situation."

Hogan told the commission: "I didn’t have any knowledge if the president had any further matters which he could not disclose to me.

"It was a complete and utter nightmare and should never have taken place ... The issues were so profound from a constitutional point of view that you didn’t have time to think this through."

Hogan said she then met Zuma on November 6.

"He (Zuma) said 'this is the deal'. He said I (Hogan) will confirm Maroga back as the CEO‚ he will come back to his office and he will then write his story and the board will write their story and then I as a minister will determine the merits of each case.

"I was not happy with that. I explained my concerns about that‚" Hogan said.

Maroga took the matter to court soon after the board accepted his controversial resignation letter. He claimed R85m for unfair dismissal‚ alternatively that he be reinstated.

Eskom opposed his application on the grounds that his employment contract had been terminated because he offered to resign. The high court in Johannesburg rejected the claim.