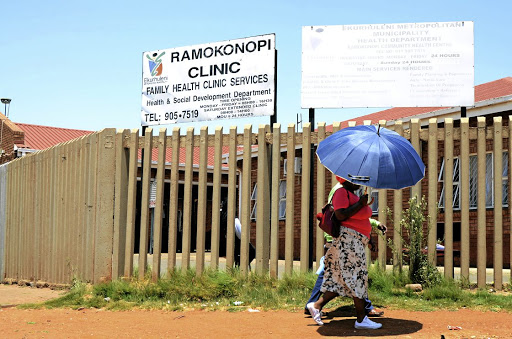 Ramokonopi Clinic in Katlehong, Ekurhuleni, where a midwife was attacked by family members after a woman gave birth to a dead baby.
Image: Mduduzi Ndzingi

A nurse at a Gauteng clinic was allegedly slapped and punched by relatives of a woman who gave birth to a stillborn at the facility.

The attack caused a partial closure of Ramokonopi Clinic in Katlehong, Ekurhuleni, yesterday.

About 60 staff members were removed from the clinic by the Democratic Nursing Organisation of SA (Denosa) due to security concerns.

Denosa regional secretary Lebohang Khumalo said they decided to withdraw their members from the 24-hour facility because it was not safe.

An intern working at Durban’s Prince Mshiyeni Memorial Hospital has been suspended pending an investigation into a series of sexually offensive ...
News
3 years ago

Khumalo said trouble started when a woman who was in labour was brought in by emergency services personnel on Saturday night.

She said the woman, who was accompanied by her parents, was rushed into a delivery room because she was about to give birth. "Unfortunately, it was a stillborn," Khumalo said.

She said the woman's parents were furious upon hearing that the baby had died and they started assaulting the midwife inside the clinic.

Khumalo said police arrived on the scene and the family left. However, the family came back around midnight to attack the midwife again.

"They came back with more than 12 people. Unfortunately, security allowed these people to come in," she said.

Khumalo said while inside the delivery area, they started beating up the nurse while insulting other staff members.

"They were alleging that the midwife had killed the baby but it was stillbirth," she said.

Probe into lack of hospital oxygen.
News
3 years ago

Khumalo said the group left the clinic and came back for the third time on Sunday morning at around 5.30am to attack the midwife again.

She said the woman and other staff members who witnessed the attacks had been placed on special leave while a criminal case was opened.

Katlehong police spokesperson Captain Mega Ndobe confirmed that they were investigating a case of common assault. Ndobe said no arrests have been made.

However, it was likely the suspects would be warned to appear in court instead of being detained.

Khumalo said about 65 of their members would have to report to other clinics until the security issue was resolved.

"We are not saying that the clinic should be closed down but we are removing our members and we are finding a safe place for them to work. They are anxious and worried," she said.

Yesterday, frustrated patients could be seen standing outside the gate after being told they could not be treated.

A 58-year-old woman said she was unable to get her ulcer and kidney medication. "I don't know what to do because I'm used to getting my treatment here. I need it because I'm very sick," she said.

Pensioner John Sikhosana, who was wearing a neck brace, said he was disappointed to find that the clinic was closed. "I'm confused. I don't know where else to go," he said.

Yesterday, acting chief director for health in the Ekurhuleni district Zolela Ngcwabe said staff members were undergoing counselling due to the trauma caused by the incident.

"The security were there. They failed to assist the nurse," Ngcwabe said.

He said the clinic was operating on skeletal staff and patients had to be diverted elsewhere. He said they would take steps to beef up security.