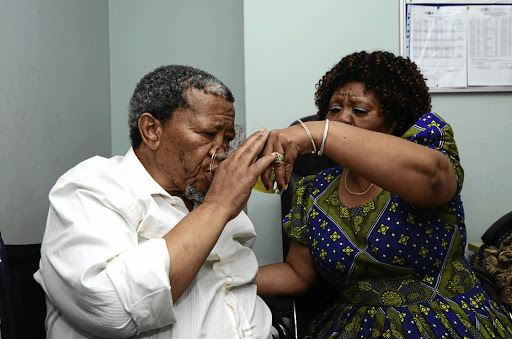 Former Gauteng transport MEC Khabisi Mosunkutu's condition is deteriorating while he waits to receive physiotherapy after suffering a stroke.

This is according to his wife Nonqaba Mosunkutu, who spoke to Sowetan yesterday, moments after Gauteng health MEC Gwen Ramokgopa said the matter had been resolved.

"I have just given him his medication. uPapa is not getting any better. His condition is deteriorating and even today he has not received physiotherapy. We don't know what to do," said Mosunkutu.

Sowetan reported on Wednesday that Mosunkutu's husband was refused treatment at the Chris Hani Baragwanath Academic Hospital the day before.

Mosunkutu, 64, said her 69-year-old husband was refused treatment by a physiotherapist.

She said they were already in the consultation room when the physiotherapist refused to assist them and "rudely" told them to go to South Rand Hospital because it is closer to their home in Kibler Park.

Ramokgopa said yesterday the matter had been resolved.

"The CEO [of the hospital] has communicated with the family. I did communicate with the wife and my understanding is that the matter is resolved. As Gauteng public health, we've been treating Ntate Mosunkutu for many years, giving him the best treatment that we give to other patients. Even now, he was treated. The only issue was where he would do a follow-up for physio," said Ramokgopa.

But Mosunkutu said her husband's need for physiotherapy had not been resolved.

Nonqaba Mosunkutu is a nurse and matron at the Chris Hani Baragwanath Academic Hospital in Soweto but today she feels betrayed by the same hospital ...
Opinion
3 years ago

"There has not been anything that has been resolved because upapa has not received treatment as he was supposed to, hence I did not go to work," she said.

Mosunkutu has already lodged a formal written complaint with the hospital CEO about the treatment her husband was subjected to.

The former MEC suffered a stroke in July and after being discharged at Charlotte Maxeke Johannesburg Academic Hospital, was referred to Bara for all follow-up treatment, including physiotherapy.