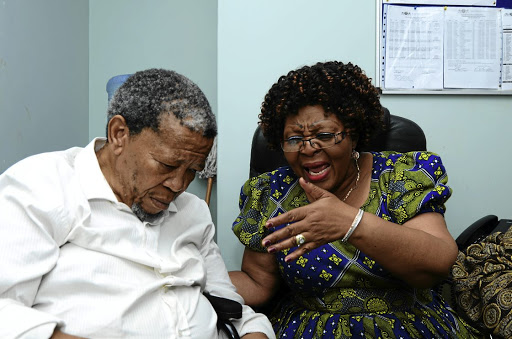 Former transport MEC Khabisi Mosunkutu was refused treatment for physio at the Chris Hani Baragwanath Academic Hospital, says his wife Nonqaba Mosunkutu, who is a matron at the hospital.
Image: Mduduzi Ndzingi

His wife Nonqaba Mosunkutu, 64, yesterday told Sowetan that her 69-year-old husband was refused treatment by a physiotherapist at the facility.

"We are sitting here for the whole day because somebody is refusing him treatment. I'm really hurting. It means this is not the first encounter. This is what they normally do to patients," she said.

Mosunkutu, a nurse who works at the same facility as a casualty ward matron, felt betrayed by the very health system she had served for years.

Nonqaba Mosunkutu is a nurse and matron at the Chris Hani Baragwanath Academic Hospital in Soweto but today she feels betrayed by the same hospital ...
Opinion
3 years ago

Speaking in her office, inside the casualty wing of the hospital, she said her husband had suffered a stroke in July, however, his condition had been stable until a few days ago.

Her husband who sat in the wheelchair with one hand on his chest struggled to speak and kept dosing off while the Sowetan team was there yesterday.

Mosunkutu said she decided to take him to the hospital when his health deteriorated on Monday because he had been receiving treatment there for months.

Mosunkutu said when they arrived at the hospital yesterday doctors prescribed medication and also referred him for physiotherapy.

"The problem started when we went to physiotherapy."

She said said they were already in the consultation room when the physiotherapist refused to assist them and rudely told them to go to South Rand Hospital because it is closer to their home in Kibler Park.

Mosunkutu broke down in tears as she described how her husband nearly fell off the wheelchair while they were in the consultation room, while she desperately pleaded for him to get help.

The Gauteng Health Department on Tuesday said a strike by general workers at the Chris Hani Baragwanath Hospital in Soweto was over.
News
3 years ago

"You can't treat patients like this. It's unacceptable. I have a prescription chart from the doctor. I'm not doing my own thing, " she said.

Mosunkutu said she wanted the department to discipline the physiotherapist, adding that she was not asking for her husband to get special treatment.

"I'm not saying this because of my husband. Everybody must be treated with respect."

Mosunkutu's husband served in various provincial government portfolios, including agriculture and transport in his active years in Gauteng government.

In the 1980s when he was a union leader, he was detained by the apartheid government for his involvement in the liberation Struggle.

"This is the man who treated the community with respect. He treated communities everywhere he went with respect as MEC and this is what he gets."

Hospital acting spokesperson Zenzo Ndabula yesterday said it was untrue that staff members ill-treat patients, adding that Mosunkutu was referred to a facility close to her home which is in line with hospital policy.

"Mrs Mosunkutu's case makes a good example of an instance where patients are referred according to the referral procedures and they are not happy with the referral.

"The downside to this stance from the public is that the hospital gets overloaded with patients who could have been seen at facilities near where they live; which then increase waiting times for services rendered and lead to more complaints," Ndabula said.

He said Mosunkutu had not laid a complaint with the quality assurance department, however, the matter would be addressed.

"The issue of the rudeness will be investigated once all parties have had an opportunity to state their case. I am confident that the member of our management team [Mrs Mosunkutu] and the staff member concerned will be able to find common ground. Mrs Mosunkutu will be called in for a redress meeting like all other citizens to address her complaint by our quality assurance department which handles complaints against the hospital," Ndabula said.
See page 16